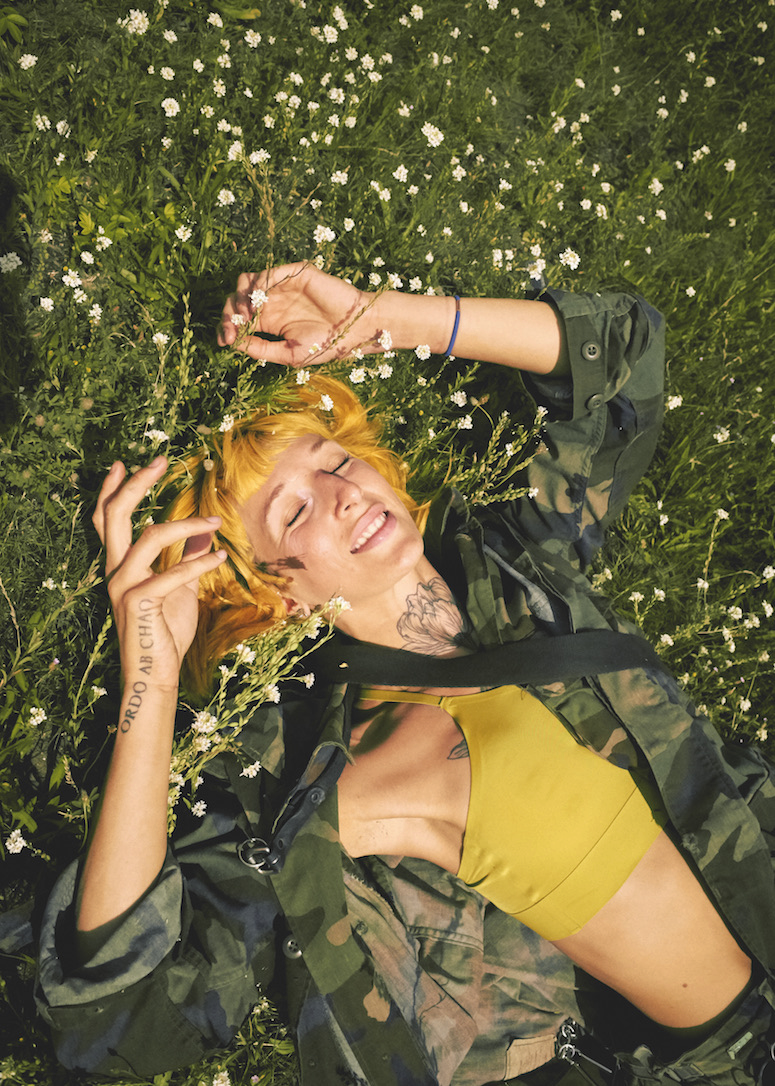 HEALED BY NATURE: MELISSA TOFTON ON HER SPIRITUAL SELF

She is a feminist who creates fetish wear; a vegan who has dedicated her work to leather; she is a nature lover who has found her home in Berlin. Melissa Tofton is a woman of opposites that come together to produce a harmonious entity, because she has made her own rules based on what her inner voice and lucid thoughts tell her. The English-born designer couldn’t care less about fulfilling societal expectations, instead defining a rebellious genre of spirituality, which champions the beauty of the expression of the true self. Melissa is unsure as to whether the acid trips of her youth influenced this process, but what she is positive about is that the use of natural medicine in ritual sessions gave, and continue to give her a new understanding of our world and its needs, a further sense for community and independence. Instead of travelling to seek healing from plants growing on the other side of the world, she relies on the power of medicines that correspond to her heritage: mugwort, mushrooms, and cacao.

Is natural medicine important for our society?

I feel like in the modern world the thing that we lack the most are initiation rituals. People are truly rooted and stubborn, and unconcerned with self-development. If you don’t cultivate these rituals held in a community, if you don’t have some element of healing or some element of challenge in order to make you feel like you’ve achieved something to get through the next parts of life, your fragile house of cards will collapse without warning – may it be the end of a relationship or losing your job… People that perform initiation rituals with natural medicines don’t encounter these feelings because they’re developing. I think that if there was a greater presence of real initiation rituals in the modern world there would be so much reform but so much less anxiety and stress.

When stressed out or anxious, many people tend to escape their routine and go party – could that also be an initiation ritual?

Berghain is a modern form of escapism! I’ve encountered people at festivals that were like “This is the one place I can express myself, oh my God this is amazing,” and it’s beautiful that there are spaces for these people to express themselves, but how sustainable is it? Do we have festivals so that for the rest of the year people can just have a job, perpetually a little bit miserable?

In what sense did you experience a healing effect during these retreats?

I don’t really have any strong visuals coming in, it’s just like a sensual feeling, I came closer to my emotions, and I became sensitive to other people’s emotions, their bodies and the body of the world. It wasn’t like a vision, like Jesus came and told me about the world – I just felt closer to my knowings. I always felt there was this kind of a pain inside of me, there was something wrong no matter how much energy I put into creating beautiful art or trying to be the best person I can be. I was always a little bit incomplete and devastated. What can I do to help the world, what can I do to really make a difference? I think taking natural medicine just plugs me in.

Taking natural medicine in a safe environment and in a ceremonial context seems to be important in the healing process. Was there an experience that really stood out?

A friend of mine organized a big retreat with 150 people sitting in a garden and taking the same dosage of mushrooms at the same time. We had the same high and the same feeling of love. One friend was dressed as a bunny and he was crying: for the womb of the world, about the fact that we’re not leaving the earth alone, not giving it the rest it needs. This was really profound. In this situation, being in nature and caring about the world’s health really showed me that we were just a bunch of fucking hippies… The other experience was with mugwort and with only female identifying people. We had a sharing cycle where people had space to talk about their feelings, where people just got heard – a thing that should be more common in society. Then we all found a tree that we loved and were twerking against it; it was summer which to me means coming into your sensual power, tuning into self-pleasure. In the end we again shared our emotions; the middle content could have been anything, but the sharing at the beginning and end is important.

With female identifying people there is still so much social conditioning. It’s important to tune into a sexual self when there’s no men around, nobody that you’re attracted to, just allowing a feeling of desire for yourself to develop. It was super good to just witness a whole bunch of female identifying people really feeling themselves for themselves. It’s the ultimate feminist ritual, no dependence at all.

After having tried different natural drugs, do you have some kind of rule you could share?

For me, personally, it’s important to take plants that grow here, in Europe. I’ve only ever taken English mushrooms for example. It’s more possible to connect with the plant if you’re taking it where you’re from, it’s connected to your heritage – I think that can be a fundamental thing. I haven’t tried ayahuasca because I haven’t lived in the rainforest. That said, everybody has something that works for them.

Mushrooms
Mushrooms activate the areas in your brain that are responsible for sensory perception, hence their often kaleidoscopic effects, while colours can also appear more vibrant. Other effects include hallucinations, the distortion of sense of time, as well as flashbacks, and the aggravation of mental health problems. You can smoke them, turn them into tea or soup, or eat them fresh or dried. When dried, mushrooms are way stronger!

Cacao
Snorting (drinking and eating is also possible) cacao can trigger an energy boost, and so many people use it in a party context. In the 15 minute long duration of its effects the serotonin and endorphin levels are raised, leading to a pleasurable sensation. Longterm risks and side effects aren’t yet known, however, due to it mild effect users can become desensitized to it.