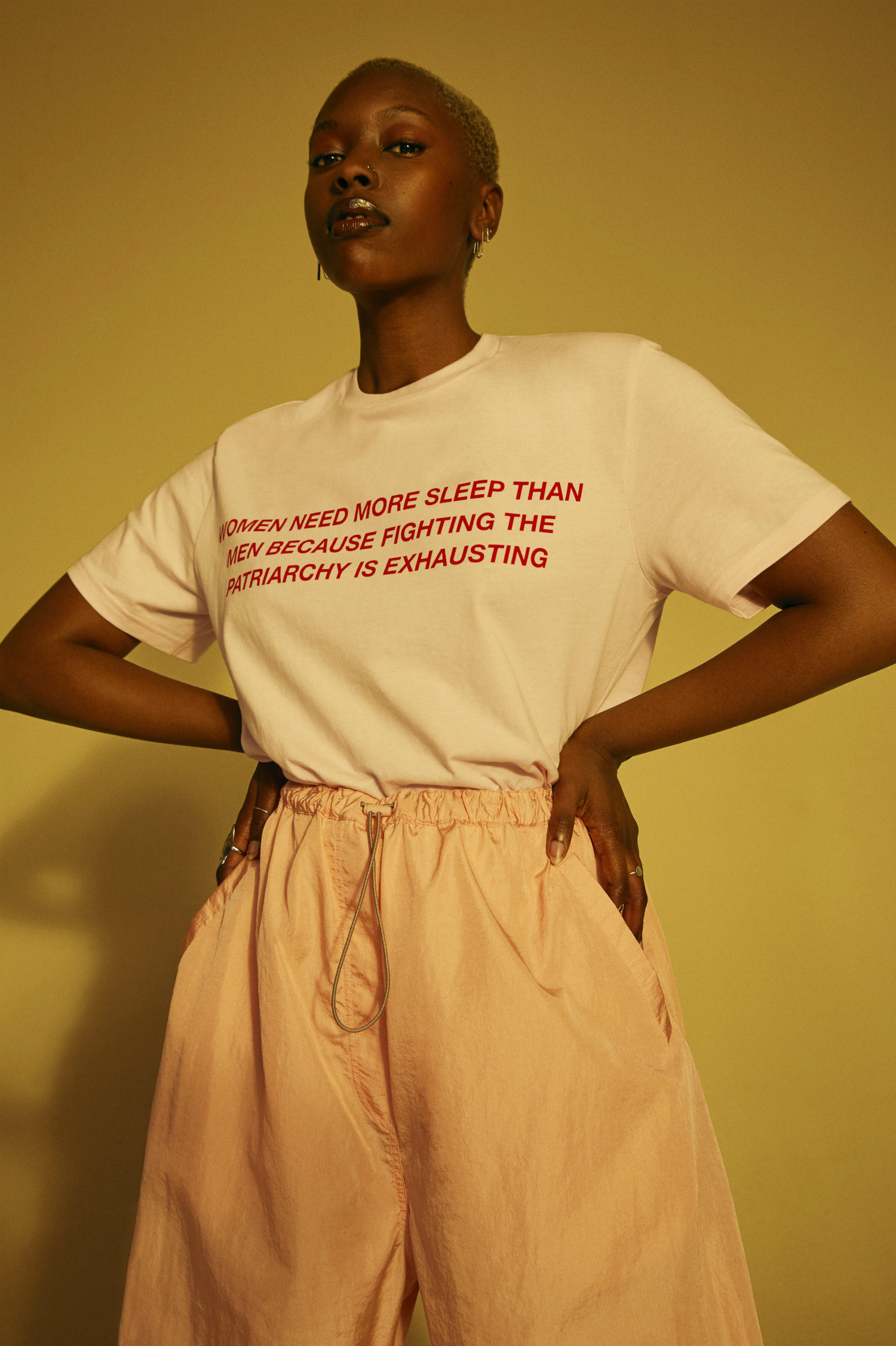 It’s no secret that the “statement T-shirt” has seen a massive increase in popularity in recent time – with everybody from Dior to Vetements embracing the notion of not wearing your heart on your sleeve but your mind on your T-shirt. In a time that sees as much disruption as ours, standing up for your beliefs as visible as possible seems to have become inevitable – and fashion increasingly linked to everything going on in both politics and pop-culture. Giving this approach a humorous and accessible touch, Scandinavian brand Weekday equally is at the forefront of engaging people in conversations previously often overlooked by the industry.

With their Weekday Zeitgeist line, the brand is releasing a new T-shirt every week, printed in stores and then sold for the following seven days only. Having this way addressed topics like social media addiction, women’s rights, mental health, and gender equality in a humorous and extremely current manner, the Zeitgeist collection has already been running since 2011. More than reason enough for Weekday to release a re-edition of their six best prints this autumn – and giving you the opportunity to join us at their exclusive in store print event this Thursday in Berlin, to get your own shirt printed right in front of you and listen to some tunes by DJ Bo$$Y. Creative mastermind behind these slogans is Weekday print designer Annika Berger, who, as part of the Weekday team for eight years already, is continuously looking to make her “headlines of the week” even more impactful and empowering.

With the idea of the statement T-shirt as fashion’s currently most direct display in mind, Annika may just be something like a modern day news broadcaster for the meme generation – we asked the creative head all about the importance of using your voice, the Weekday Zeitgeist collection, and the power a T-shirt can actually hold.

Currently, the Weekday Zeitgeist collection is commenting on nearly every important topic. Was there a particular political or social event that sparked the idea six years ago?

The idea behind Zeitgeist is to look into what’s going on in the world. We see the prints as the headline of the week, and it’s a really fun process choosing what to cover and how to cover. Sometimes we talk about serious stuff and sometimes we talk about fun things that have gone viral, like Beyoncé giving birth to twins.

I started at Weekday in 2009 as a freelance print designer. At the time, Weekday did not have a print designer. The screen printing rooms were already in place, in every store and I thought it was an amazing opportunity to create a print that could be bought in store the next day. Today I am responsible for all the prints we produce, working both with men’s and woman’s collections, as well as Zeitgeist.

Do you feel like the Zeitgeist collection is especially relevant and important right now?

Yes very, Zeitgeist gives us a chance to talk about issues and events we care about outside of the realm of fashion. We’ve covered politics, identity and science. We always want to use our voice to raise awareness and to inspire others to take actions.

With a lot of brands embracing the notion of the “statement T-shirt” – Why are clothes and fashion in general good tools to reach people?

Fashion is one the strongest messaging tools. It’s hard to miss when it’s right in front of you. And hopefully when a fashion brand speaks about social change it gets the attention of people who might not know how to get involved or make their own statement.

You’re releasing a new T-shirt and print every week – where do you look to continuously find these messages?

Throughout the week I am inspired by the conversations that I have and I collect small fragments of ideas, pictures, words, sentences and connect them. It’s sort of a puzzle of inspiration, I take a bit from here and there and create the final result. I read many of the major newspapers, check Instagram and twitter daily. I’m also inspired by my friends, I read a lot of books, watch films, go to art exhibitions. Travelling is also very inspiring

With this cluster of information and inspiration constantly surrounding you, how can we imagine your work environment?

We have a very creative in-house Design team based in Stockholm which I’m a part of. We work super close together and always try to inspire and push each other. Zeitgeist is “my” project, but of course we all give feedback on it.

What aspect about the Zeitgeist collection is most important to you personally?

That it’s a fun process choosing what to cover and how to cover it as it gives us a chance to talk about issues and events we care about outside of the realm of fashion.

What topics do you feel are currently most crucial to cover?

Self-love is a favourite to do because it is so important and always relevant.

The re-editions cover topics like social media addiction, women’s rights, self-love/acceptance, mental health, gender studies and gender equality. We felt like the ones we choose gave a good overall impression of topics we have spoken about throughout the years and are close to our hearts. Also some, for example the Fighting the Patriarchy and My Pussy, My Choice, have been favourites among our customers.

Why is it important in general to raise your voice and stand up for what you believe in?

Weekday believes by taking a stand on certain issues we can set a good example wherever we operate and inspire people to do the same. Our philosophy is to speak up for humanity. That means that we take our actions by supporting humanistic organizations (like Red Cross, UNHCR etc) and want to use our voice to raise awareness and to inspire others to take actions.

Join us at Weekday’s in store print event on the 28th of September in Berlin, get yourself a freshly printed Zeitgeist shirt, and listen to some fine tunes by DJ Bo$$Y –  get all info here.

YOU'RE PROBABLY GUILTY OF DIGITAL BLACKFACE. YES, YOU.