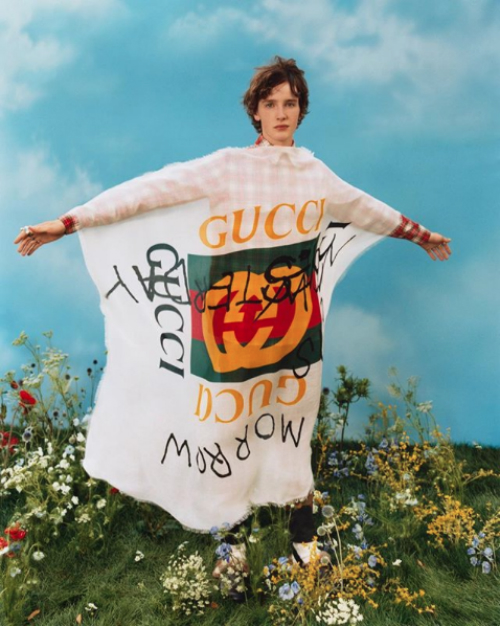 DEBATING THE USE OF POP CULTURE IN ALESSANDRO MICHELE’S GUCCI

When Alessandro Michele took the lead of Gucci in the days of January 2014 an unexpected radical change was in sight for the Italian luxury fashion brand. Within less than three years Gucci would have become one of the leading and most talked-about fashion brands around and Michele the most influential Italian person in the world according to Time magazine.

Creativity and innovation reached through a conscious knowledge of the past. This could seem a quite common approach within the fashion industry – sometimes resulting in dull, unremarkable collections – but this time Alessandro Michele seemed to understand the key concept of (retro) pop culture and how its inspiration is leading to new milestones in Gucci history. He put fashion ahead of accessories, which had become a Gucci staple in the pre-Michele days, and embraced androgyny for men’s collections.

Androgyny is one of the key concepts he borrows from the past, directly looking to 19th century dandies and their late 60s British revival. Silk shirts with sewn-in scarves on long-haired shaven models who look like high society dandies right out of Soho in the 60s.

The 2015, 2016 and 2017 collections have been characterised by suede coats and rounded pointy collars, reminiscent of the 70s and even elements like knitted berets for men and oversized square glasses frames. Berets hadn’t been seen on men since Black Panthers or 1950s jazzmen. These style elements were coming straight from pop culture, and would probably have been seen as a ‘masquerade’ by the luxury fashion world until Michele turned them into staples of new Gucci collections.

This concept reached a new high with the pre-fall ’17 video advert. Shot at London Mildway Club – un-refurbished since the 70s – with dancers showcasing their best northern soul moves and Frankie Valli’s “The Night” providing the soundtrack and setting the dreamy glorious sweaty atmosphere. In the semi-darkness of the club, the glittery shades, clobber and patches stand out like stars in a clear summer night sky. Northern Soul, fascinating yes, but unfashionable in the luxury fashion world until Gucci dusted it off.

Think of the way Gucci has been influencing the fashion world with patches and embroidery, once again elements that have been borrowed from pop- and subcultural scenes like British soul boys or late 60s American West Coast bikers embodied on screen by Peter Fonda. With the brand’s fall-winter ’17 campaign Alessandro Michele played another triumphant ace-in-the-sleeve of pop culture. This time the sci-fi and space-age B-movie era, with a video advert fully borrowing elements from the likes of Star Trek, Space 1999 (whose main theme is used to deafen the clip) Creature of The Black Lagoon, U.F.O. and similar other productions.

But this excessive re-working of cult elements under the sign of Gucci has also lifted a storm of plagiarism accusation. The so-called “Guccification” wanted by Michele has already been accused multiple times of copying other designers’ and artists’ works without giving any credits – abusing the brand’s notoriety and position in the fashion industry.

A faux-fur women bomber jacket from the 2018 Gucci Cruise collection resembled a 1980s Dapper Dan model. Then, at the Gucci Cruise showcase, two logos – one with a roaring tiger used on shopping bags and one with a snake printed on a tee – were attacked of having been copied respectively from artists Milan Chagoury and Stuart Smythe.

On the left is the work of @pierlouis7, a womenswear student on @bafcsm, posted 7 weeks ago. On the right is a still from a @gucci post yesterday. Look at both accounts and write below what you make of this. Wherever your influences come from, it is vital to credit. Young emerging designers and artists only have their ideas to trade. #CREDITYOURINFLUENCES #PAYYOUNGCREATIVES with thanks to @gerrit_jacob

Michele rejected all these accusations, especially the Dapper Dan’s jacket one. In his eyes, the faux-fur and Gucci patterned bomber jacket had been intended as a tribute to the New York stylist. Ultimately, the notion of “Guccification” can be seen both as plagiarism as well as a tribute to and celebration of pop culture.

Today’s post-modern society has produced a fall of boundaries between high and low, between luxury fashion and streetwear, but also between different artistic fields. It happens so that sublime Lorenzo Il Magnifico poetry is being Guccified, used alongside 1970s B-movies and 1980s New York ghetto icons. This concept of Guccification in itself includes, in a way, a certain percentage of plagiarism.

Not only the collections themselves, but the whole idea behind them are drenched in retro pop culture reinterpreted with a modern twist, by a brand which is trying, seemingly successfully, to re-establish itself as one of the leaders of Italian and worldwide fashion. This way, Gucci is highlighting how the past needs to always be studied carefully to shape the future at best.