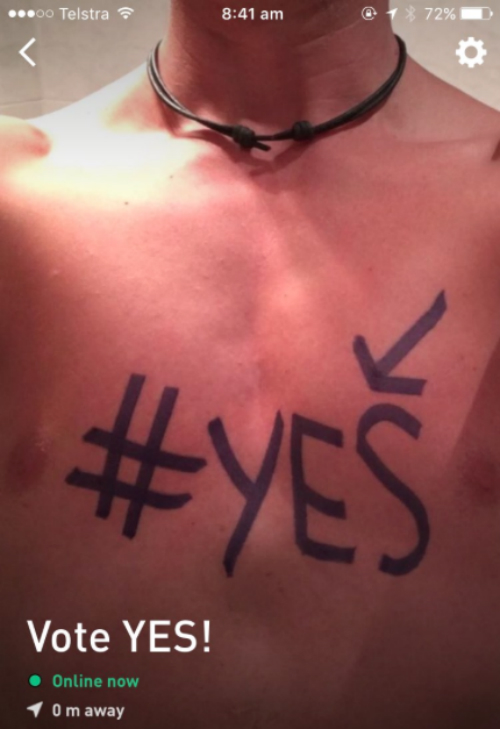 AUSSIES USE GRINDR AS CAMPAIGNING GROUND FOR SAME-SEX MARRIAGE

“Are you registered to vote?” may not exactly be the message you are looking for when you are on Grindr or Tinder – but there is an increasingly growing part of Aussies using exactly these phrases to engage other users in an upcoming political voting on same-sex marriage, with yesterday being the last day to register to vote. One year after the Australian Senate’s rejection on legalisation, Australian Prime Minister Malcolm Turnbull didn’t give up and finally proposed an approved non-compulsory public ballot on that issue. From September 12, Aussies will vote by postal ballot and results will be released two months after on November 15. At the moment, same-sex marriage is banned under Australian federal law despite the support of 61 percent of Australians according to a 2016 Gallup opinion poll. The campaign has fractured the government and turned increasingly vitriolic and bitter in recent days. Sydney and Melbourne have seen their streets filling with posters and fliers claiming homosexuality as “a tragedy for a family” or “92 percent of children raised by gay parents are abused”.

Using Tinder to tell people to enrol to vote for #marriageequality, inspired by @ImogenDunlevie pic.twitter.com/KrttVzqO2W

Still, the Australian Electoral Commission (AEC) received 765,000 requests from future voters through the country. Also, social media had a significant part to play in the campaign. The debate gained an international prominence through outlets like Twitter that saw celebrities such as Kylie Minogue and Ellen DeGeneres urging Aussies to register. But Twitter isn’t the only app used for political purposes – recent developments also showed we equally shouldn’t underestimate the significance of dating apps in times of debate. Tinder and Grindr seem to become the new campaigning grounds where users use matches to send messages to enrol.

In the past year, Britons used Tinder for the last elections to prevent people across the country from voting for Tories, Maple Match promised to make it easy for Americans to find a Canadian partner to save them from the “unfathomable horror” of a Trump presidency. The politicisation of dating apps is a forceful tool to connect with people your age and destigmatise their original use – with the apps even potentially becoming a new platforms for LGBT candidates to run for a seat. A short bio, a face picture, and an instantaneous discussion might just be the modern day solution to decide on a next political leader.

Hit Grindr to get peeps to enrol! pic.twitter.com/gzjaTKdejA

My friend is sending all of her Tinder matches enrol the vote messages.

Tag yourself, I’m this guy pic.twitter.com/6br9KmYRNe

Do the thing guys pic.twitter.com/o7N76FrsEt