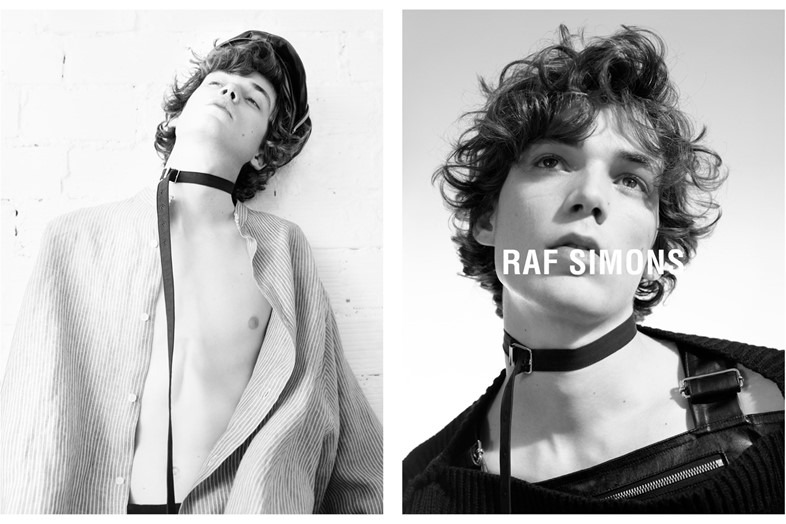 KNOW YOUR ICONS: RAF SIMONS – THE DESIGNER’S IMPORTANCE AND IMPACT

In fashion, and equally beyond, you know someone has made it if you can refer to them by just their name – no surname, no explanation, and no matter the brand or house they’re currently working for. There is Rei, there is Hedi, there is Yohji, and then, certainly, there is Raf. The Belgian menswear advocate, who, called just by his forename, often gets the notion of being somewhat like a dear friend. One we’ve known for years, experienced a variety of highs and lows with, and, most strikingly, could still never quite grasp.

Because in fashion, apart from making said name for yourself, you also have to fill those letters with ideas, emotions, rebellion, and a certain sense of mystery. All of which Simons has proven to have plenty of in the more than 20 year span of his career. Being a 27-year-old former furniture designer, he debuted his first menswear collection in 1995, presumably being more than unaware of the changes and achievements that were to come. Those being, amongst others, the appointment as creative director at Jil Sander and his first womenswear collection ten years later, his shift to Dior in 2012, and, most recently in 2016, being named Chief Creative Officer of all-American icon Calvin Klein.

And these are just the most commonly and commercially known. During and before these stints, he has built what can only be described as a fashion legacy, a cult following, and a significance surrounding his name equal to those of well-established fashion houses. With Simons still heavily influencing both menswear and womenswear today, we’re unpicking the designer’s on-going importance by taking a look at the key cornerstones that keep on carrying his career and name with the meaning both hold: ideas, emotions, rebellion, and a certain sense of mystery.

There is good reason Simons has been praised as nothing less than “the most important men’s wear designer in the world”. He revolutionized a field of fashion often a bit under the radar – and did so more by coincidence than calculation. Solely focusing on menswear for the first ten years of his career, the designer used his own body to fit all his clothes and simply designed what he and his friends wanted to wear. The outcome were slim suits, reminiscent of Helmut Lang’s designs a few years back, yet infused with an unmistakable sense of youth and authenticity brought by Simons and shown on street-cast Belgian boys instead of models. With this honest approach, Simons managed to pave out a new path for menswear just a few seasons in.

And the fashion forecasting didn’t stop just there. For Spring/Summer 2002, he showed a oversized hoodie and sweatshirt heavy collection titled “Woe Unto Those Who Spit on the Fear Generation… The Wind Will Blow It Back”, loaded with youth warriors sporting looks that could be right out of a current Yeezy offering. Or as stylist Marie-Amélie Sauvé has fittingly summed it up: “He did everything before anyone else, and everybody has copied him.” Most recently, the designer’s strive for boundary pushing became increasingly evident by his on-going fascination with the art world, and the intersection of art and fashion. Collaborating with the Robert Mapplethorpe Foundation for his Spring/Summer 17 collection shown in Florence last June, Simons incorporated images from the acclaimed photographer into his designs, using the clothes as canvases for the pictures, he said. It’s this intellectual approach that seems to always provide his work with a second, delicate layer – whether he’s working with the Mapplethorpe Foundation, his long-time collaborator Sterling Ruby, or just his own mind.

For Simons, fashion and emotions were intertwined right from the start. The sole reason he says he got interested in working with clothes as opposed to furniture was seeing a show by Martin Margiela in 1989. Interning with Walter Van Beirendonck at the time, Simons was taken along to Paris to witness Margiela’s now iconic show on a playground in the outskirts of the French capital, with kids running along and around the models, and an audience that is said to have been moved to tears – including Simons. Ultimately leading him to dive into fashion, this feeling of being moved by clothing and the showing of such seems to have stuck with the designer ever since. When taking his job as creative director at Dior in 2012, he famously said in an interview his goal at the French fashion house was to “bring some emotion back, to what I felt in the nineties, because I see a lot of amazing clothes, but I don’t see a lot of emotion now.”

And it’s not just Simons looking for these emotions in fashion, it’s also the industry seeing these emotions in him and his work. Closing his last ever show for Jil Sander in 2012, Kinga Razak was in tears while walking down the runway, equally was the designer himself when taking his bow. In an age and industry that increasingly seems to favour the fast and flat over the authentic, Simons has managed to keep a sense of himself in whatever he did, while being an integral part of the industry.

If Simons’ work has been connected to emotions right from the start, it equally has been to youth. Adolescence, youthful spirit, and subcultural identities have been formative influences that can be traced back to his very first collection. Inspired by the British post-punk movement, the designer’s 1995 debut laid the groundwork for many more themes of rebellious and determined teens to come, and also gave a first hint at Simons’ deeply rooted bond to music. Growing up in a small town in Belgium which didn’t have many cultural happenings to offer apart from one music shop, Simons often spent his days dwelling between rows of records.

Later, he used those experiences as a distinct base for his collections, from featuring the members of Kraftwerk and their signature red-shirt-black-tie look in his A/W 98 collection, to embracing Gabba for S/S 00, to showing parkas with album covers from New Order and Joy Division on the back in 2003 and simultaneously starting his long-term collaboration with Factory Record’s Peter Saville. A partnership that just recently was revived, when Saville redesigned the Calvin Klein logo for the designer. Simons always had a strive for displaying his interests beyond clothes, which quickly made him a designer creating a world much further than exactly those. Whether that was through videos, which he experimented with during the first seasons to show his collections, or music.

And it’s not just Simons favoring music, but also the other way around. To quote one of Simons’ many prominent musical admirers, A$AP Rocky, who wrote a short article on the designer for this year’s “100 most influential people” list, one of Simons’ most distinct achievements is that he “built a whole new religion around fashion”. And one that people are more than eager to be part of. Because if according to Rocky Simons is the god, his clothes are all variations of the Holy Grail – apart from his article, the rapper also dedicated a song to the designer just this year, tellingly called “Please Don’t Touch My Raf”.

As for the worshipped himself, the connection to his designs, and fashion in general, is a bit more ambiguous. Once describing it as a love-hate-relationship, Simons, who never studied fashion design but is self taught, seems to often quarrel with the rules and boundaries of the industry, resulting in him abruptly calling it a quit a few times during his career already. First after only five years in, when the designer took a sabbatical after his A/W 2000 collection, and, most prominently, when he announced his departure from Dior in October 2015 to shift his focus to his personal projects. In a time that fully embraces the idea of the “designer-as-celebrity”, Simons seems to still value authenticity over fame, and his personal beliefs over his adorers claims. Still, with Calvin Klein as his new employer, just like after that sabbatical, the designer seems to can’t do too long without fashion either. And rightfully so, as he himself put it in his GQ interview earlier this year when speaking about his influence along with that of Miuccia Prada: “fashion doesn’t exist if we don’t exist”.