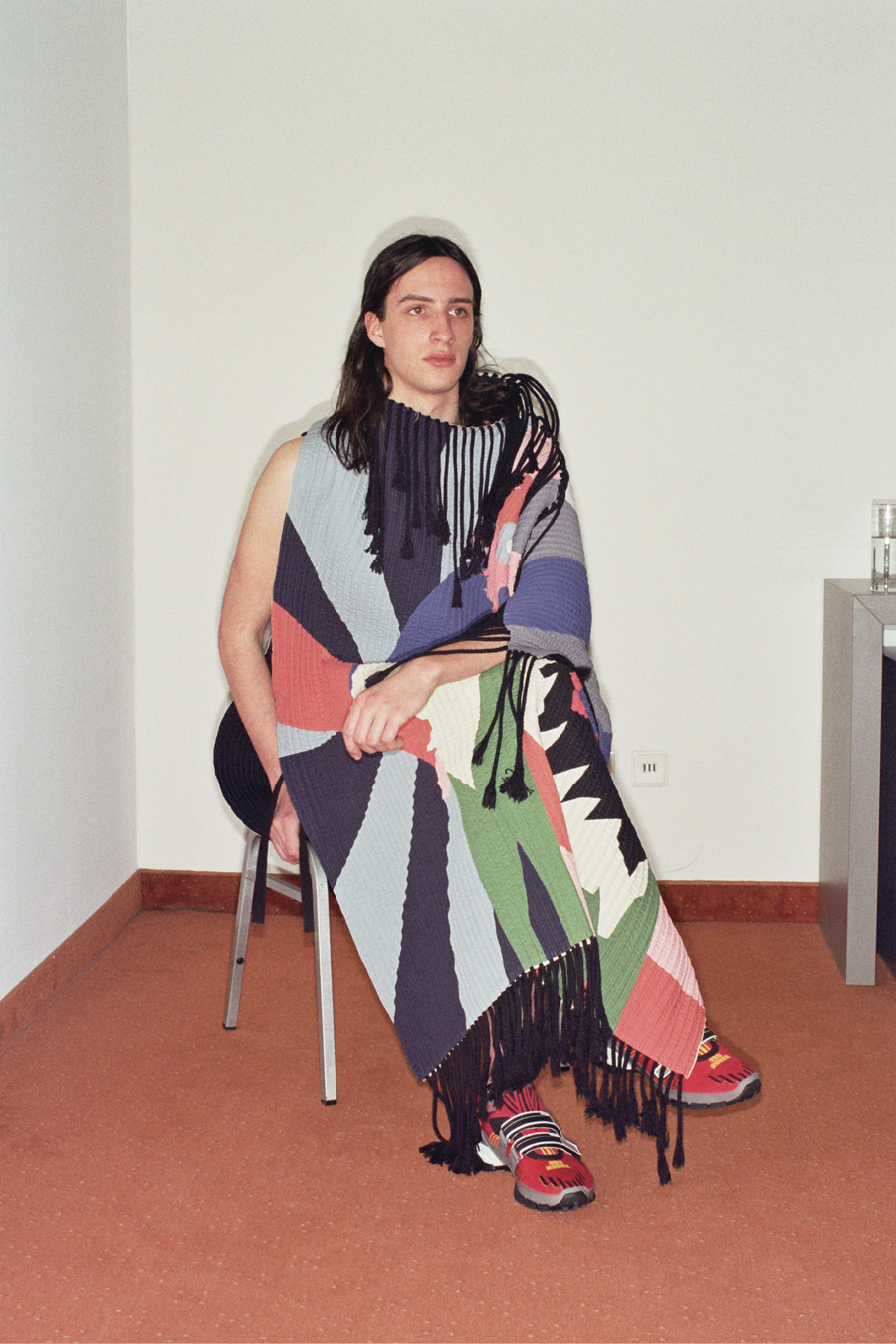 10 UP & COMING DESIGNERS WE CAN’T GET ENOUGH OF

There was a time when placing fashion houses and brands into a certain category was pretty simple: A two-row table, one side being the traditional, well-established maison, creators of extravagant, luxurious evening-wear. The other representing the more everyday-esque, often easier accessible prêt-à-porter. In this day and age however, we have come to view the fashion landscape—and many other things—as more of a spectrum rather than forcing ourselves to explicitly define whatever it is we are looking at. Quite frankly, it seems that, now more than ever, rules do not apply to anything or anyone in the creative industry.

Nowadays, there is hardly an environment as diverse, fast paced, and full of creative energy as the fashion industry. Textiles have moved from being solely practical to becoming our preferred method of self-expression. Fashion is a tool of communication without having to even speak. It builds a bridge between art and architecture, combines emotion with functionality unlike any other human creation. Economically speaking, fashion has progressed: Rather than simply being used to protect us and keep us warm, it is now a luxury product.

Unsurprisingly, this has led to an unbelievably large market. A market so full, each and every one of its pawns is, frankly, interchangeable. That being said, there is nothing more important for each and every designer (and his company) to represent a form of uniqueness, to embody a certain character or persona.
Houses such as Chanel or Dior, for example, have a historical piviledge, if you will, by being two of the oldest and most renowned houses to actually market clothing beyond its initial purpose. These companies have successfully sustained their image, given their product significance and recognizabilty.

Naturally, it seems all the more important to look past the classics and shed a light onto the Up & Comers. Those crafting art, writing their own stories, spreading their own messages, and making their own mark through their medium of choice: Fashion. To honor the individuals unapologetically pursuing their dreams and desires, turning what started as a vision into something threedimesional, slowly but steadily manifesting their brand and its specific identity in the business, we curated a 10-piece list of rising stars ready to shine their light all the way into our hearts and wardrobes.

BARRAGÀN is a fairly new label, founded by Mexico City offspring Victor Barragàn. Just about 9 months ago, the designer debuted his gender-bending collection at New York Fashion Week to great success. Prior to this, he achieved loads of internet attention for a line of T-Shirts, inspired by popcultural themes such as Sex and the City, and the Scream movies. Barragàn’s design-aesthetic is as diverse as the cast of models he chose to sport his garments. Velvet, leather, plenty of ruffles and cut-outs. All of which is usually kept in a toned down, close-to-nature color-scheme. The latter also being a dominant element in terms of accessories, styling and campaign concepts. The wonderfully weird mix of unexpected material combinations, provocative tailoring and a distinctive point of view makes for an exciting contribution to a new era of genderfluid fashion.

Former Alexander McQueen and Jonathan Saunders intern Chin founded his own label, Chin Men’s , shortly after graduating from London’s prestigious Central Saint Martins with a degree in menswear. The label’s use of classic menswear attributes umped up by flamboyant silhouettes, and elegant grandma-esque accessories deliberately seperates it from other male-oriented brands. Chin Men’s is one of our personal favorites when it comes to experimenting with masculinity in form of clothing. T-Shirts printed with “Your Pussy Boy” or “Oral”, oversized bowties and giant (faux-)fur collars, plus a sleek pair of jeans and deconstructed see-through button-up … Shall we go on or will “We want it all!” suffice?

Next up, we’ve got Berlin-based design collective GmbH. The enigmatic croup of creators – led by Benjamin Alexander Huseby and menswear designer Serhat Isik – was one of this year’s LVMH-prize nominees, one of the most sought after honors of the industry. Their style is largely influenced by their native Berlin’s nightlife, particularly its famous techno scene. In addition to this, they’ve also managed to make sustainable fashionable, due to their preferred use of recycled materials. Fashion that looks AND feels good? Yes, please!

Most recently, Elle Magazine awarded Swiss designer Julia Seemann got a slot on Berlin Fashion Week’s calendar to show her autumn/winter 2017 collection on the runway to a selected, international audience of some of the market’s most influential people. Rihanna, Kim Kardashian West and Kehlani are only three of many fashion-forward, high-profile public figures to have been spotted wearing the young label’s designs. Her latest collection displayed standouts such as a tartan-printed coat with black leather-ruffles, multi-colored motorcycle attire, and snakeskin over-knees paired with a revealing, oversized trench coat. With this offering, it became clear that Julia Seemann, too, is a label unwilling to be labelled. All of these assets combined make for an exciting and daring, yet still polished and sophisticated style.

Marine Serre has worked for some of the biggest names of the industry: Dior, Alexander McQueen, and Margiela (to name a few), and has since garnered a spot on Demna Gvasalia’s Balenciaga-team. Knowing this, it will come as little surprise to you that the young Parisian designer and her namesake brand have been named the winner in the run for this year’s LVMH-prize. Ariana Grande and Blogger Susie Lao of Style Bubble have been fans for a while now, and if you weren’t, it’s time you became one!

Mowalola Ogunlesi is a Nigerian Fashion designer who, only very recently, graduated from Central Saint Martins. As to be seen in the picture above, the young creative’s heritage plays an integral role in this up and coming brand’s stylistic identity. For her current collection, Ogunlesi was inspired by her hometown of Lagos and its rich arts and culture scene. More specifically, the line explores what initially seems to be some sort of an “opposites-attract”-relationship between African standards of male sexuality and vibrant, colorful, (even some what comedic) graffiti emblazoned all across the city’s walls. While Africa is becoming more and more of an eyecatcher in terms of emerging talents, highest level craftmanship, explosive prints, and beautiful jewelry, Mowalola’s approach stands out amongst fellow emerging game changers.

Nicola Indelicato is an Italian menswear designer, educated at Florence’s Polimoda and trained by Vivienne Westwood and Roberto Cavalli. After gaining experience in two of the most looked-up to fashion houses in the world, Indelicato decided it was time to take his career to the next level by establishing his very own contemporary clolthing line. The Florentine’s pieces also serve a as a great expample for how blurry the lines can be when it comes to gender in fashion. His work is probably best described as sexually charged, asymetrically tailored bore-core fashion, consisting of sweats, tees, coats and printed undergarments upgraded to their fullest artistic potential.

The 2015 Irakli Rusadze and Davit Giorgadze-founded label Situationist is one of the most notable standouts of Georgia’s current fashion scene. Evere since the rise of native Demna Gvasalia, the Eastern European country has been in the spotlight of international fashion press. This is, in part, due to the Post-Soviet spirit, running through the seams of every garment – a popular motif in times of  Vetements and Gosha Rubchinskiy. Situationist, in particular, has managed to stand out with its sleek but edgy designs. Their giant leather trenches, thigh-high boots, and dirty-silver jewelry depict a certain roughness in juxtaposition to sexy, body-fitted jumpsuits, mini-skirts and lots of cleavage. Situationist’s popularity just about skyrocketed when model Bella Hadid was caught sporting not one, but two of their ensembles for Paris Fashion Week. So, if you haven’t heard of them yet, it’s about time you did!

Technically not new, but still worth a mention: Wendy Jim has, unlike the rest of our list’s place holders, been around for nearly two decades. It was founded in 1999 by Hermann Fankhauser and Helga Ruthner in Vienna. Both of them attended the Viennese University of Applied Arts, and met while in training at iconic, fellow Austrian fashion house Helmut Lang. Ever since, the dynamic duo has shown their mens- and womenswear-collections in Paris, achieving an underground-favorite-status. It is now, though, that Wendy Jim seems to be bubbling just beneath the surface of mainstream success, as their aesthetics place them in the midst of present day’s hypes and trends. Just recently, for instance, the brand collaborated with Vetements- and Balenciaga-stylist Lotta Volkova for their current campaign.
Wendy Jim is one of those labels shrouded in mystery, no definitions in sight, playful but dark at the same time. We’ve loved Wendy Jim for quite some time now, and are more than ecstatic to see where they go next.

Sometimes it’s best having the creators themselves explain what it is they are doing first hand: “ZDDZ offers a new view on urban routines; quotes from news headlines and advertising slogans are subtly mixed with striking graphic design, inspired by common city attributes like road markings, construction signs and logos. Shapes and details of every collection refer to workwear and military uniform. ZDDZ creates pieces which are radical and noticeable, whilst at the same time, comfortable and functional” – Couldn’t have put it any better than that.