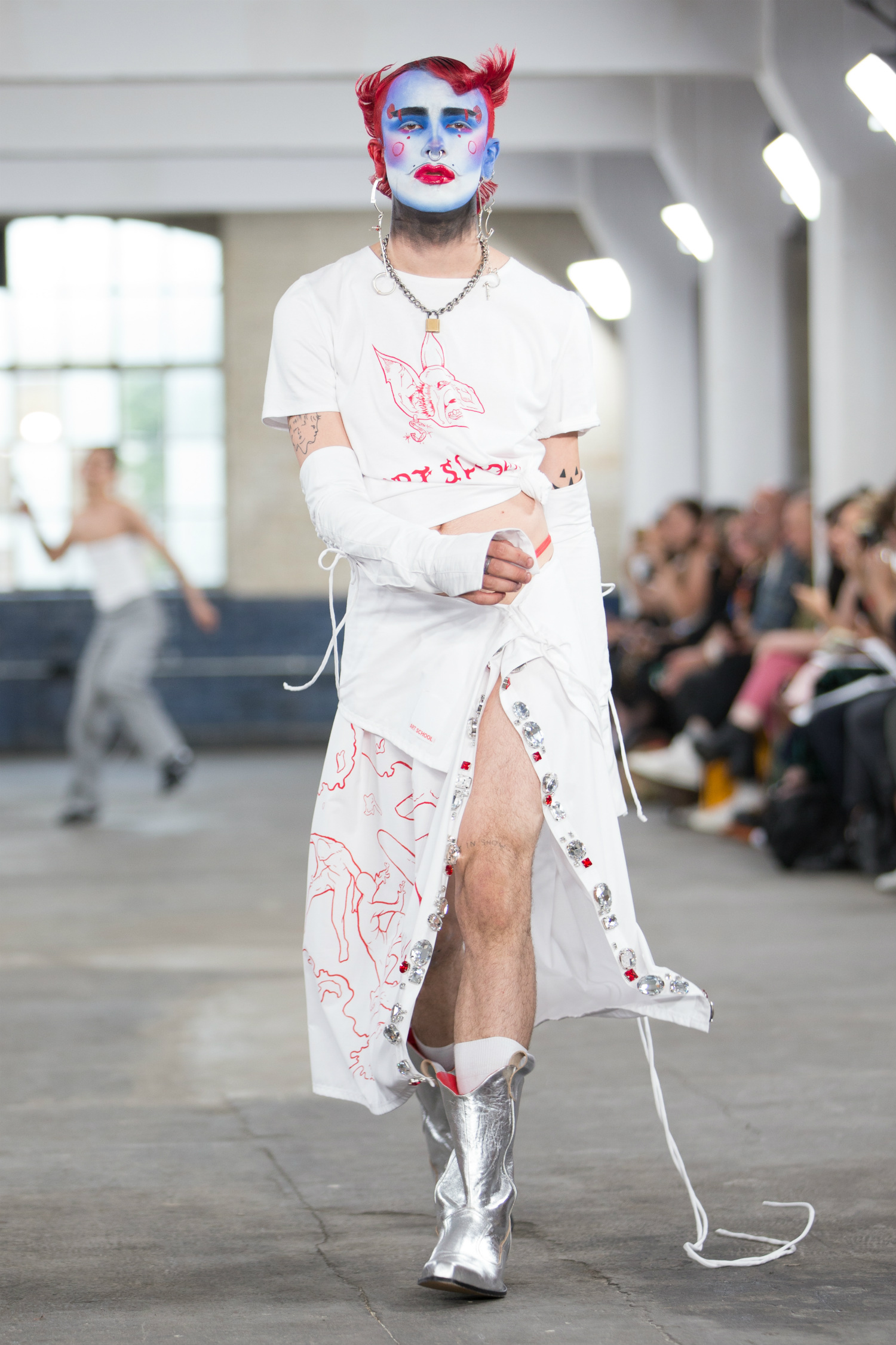 FASHION AS A SAFE SPACE: BETWEEN THE PARTY AND THE POLITICAL AT LFWM

Screaming teddy bears were what greeted you first from Liam Hodges‘ clothes in his show on Friday, even brought to live as a kind of fashion mascot at the end of his S/S 18 offering. They functioned as a modern adaption of Edvard Munch’s “Scream” the designer explained, encapsulating the constant stream of tumble and noise today’s youth has to face – while still trying to look cute. Which brings us right to the core theme explored by the cast of designers showing at this season’s London Fashion Week: Men’s, which ended yesterday: How to build your identity in a world that seems to be everything but steady.

For Liam Hodges, the answer was showing that, despite a cuddly surface, you’re not afraid to fight and stand your ground. He made his teddy bears, and even some models, fletch an impressive row of teeth, along his typical work wear inspired trousers and jackets, this season sporting his keyword “noise” all over them. Equally as loud, though in a whole different execution, were the designs of London’s favorite club kid Charles Jeffrey, who did his first stand-alone show on Saturday, once again bringing the feeling of freed expression from his LOVERBOY club nights to the runway. Bright colors, a variety of historical references, painted faces, and a pulsing spirit confronting a not nearly as joyful political climate.

Eden Loweth and Tom Barratt of Art School, which showed under the Fashion East MAN umbrella this season, did their own conquering of the catwalk: in the spirit of dance, and daringness. The duo envisioned their stage as a safe space, filled with their self-described “queer couture”. Pushing the boundaries of what gender can even be defined as today, Loweth and Barratt showed clothes with a non-binary approach, juxtaposing a sense of fantasy and rebellion, and contributing to a thriving set of designers questioning gender norms and their relation to modern day fashion.

For Edward Crutchley, this connection can be defined as “the irrelevance of gender; the relevance of sex”, as he depicted through a variety of gowns shown on men, the mixing of womens- and menswear, and a play with proportions and width. Grace Wales Bonner on the other hand gave her acclaimed reinterpretation of black male identity a minimalistic touch, showing in a sleek venue, renouncing her signature embroidery and headpieces, instead fully focusing of the core element of the Wales Bonner brand: a suit.

This nod to office wear became evident with a variety of designers – but don’t be fooled by this seemingly a bit more settled approach, as designers like Xander Zhou, Samuel Ross of A-Cold-Wall*, and Martine Rose made sure to give the staple a more than modern make-over. Zhou looked to outer space and its extraterrestrial appeal for inspiration, while Ross explored the intersection of what happens when a former student first enters the work world, especially under the current political situation in Britain. Rose combined her signature broad shoulders with references from your typical suburban dad’s favorite activities: climbing, bicycling, golfing – in her vision encapsulated through layered tailoring, and not just for your dad to wear.

Or just for the catwalk – because although it might be the safe space these new ideas can first blossom in, designers this season showed that it is far from the only space they should be embraced. Take your textile fantasies to the club, the office, the street, even the golf course, they seemed to proclaim, and let a fragile world become a bit more fun.