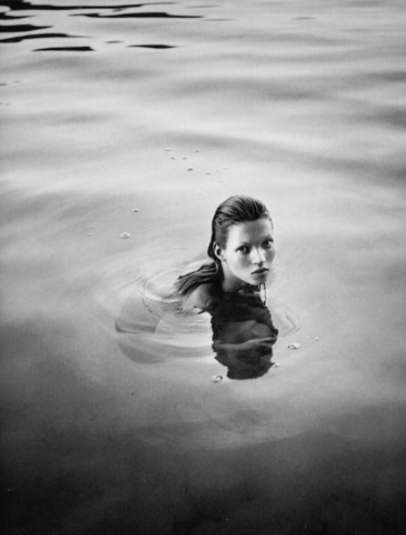 Today Vogue have released a dreamlike glimpse of the nascent model Kate Moss, with original outtakes first shot by Mario Sorrenti in 1993 for Calvin Klein’s Obsession. The 90s campaign pushed the boundaries of advertising by providing a raw, authentic portrayal of romance amidst a plethora of fabricated romance for the sake of selling. Calvin Klein himself devised the idea, which was radical in its simplicity, by tapping rising photographer and model muse who were engaging in a deep love affair. Klein equipped the young lovers with film and flew them to the idyllic British Virgin Islands to capture their infatuation.

Sorrenti speaks fondly of their 10 ten days spent on a secluded caribbean beachfront, void of stylists and hair and makeup, “We were in this beautiful, crazy place in our minds, and the emotion was very honest”. This raw, uncompromising emotion is discernible in the video, the delicate, gauzy 16-millimeter footage contrasted the traditional visual language of perfume. No other footage of the supermodel exudes the same romantic vulnerability and authenticity.

In an exclusive interview with Nick Knight for ShowStudio’s Subjective series, Moss commented “Calvin was clever, he saw from the pictures that it was obsession, it really was an obsession,” she continues, “I’d wake up in the morning and he’d be taking pictures of me. I was like, ‘Fuck off!’ I lay like that [naked on the couch] for 10 days. He would not stop taking pictures of that. But, he’s Italian, you know? He was like ‘Lay down, I’ll tell you when we’ve got it!’ We probably had it in the first roll. They rented us a house, just me and him and loads of film, in this deserted little shack on the beach.”

This appearance of Moss through the lens of a lover is symbolic of the raw 90s aesthetic which has recently been revived, decades later. It has also inspired a meta-perfume created by Raf Simons, creative director of Calvin Klein, who will release Obsessed on the 1st of July. Expect a visual archive of never-before-seen video snippets from the original shoot to accompany the musky scent of white lavender.