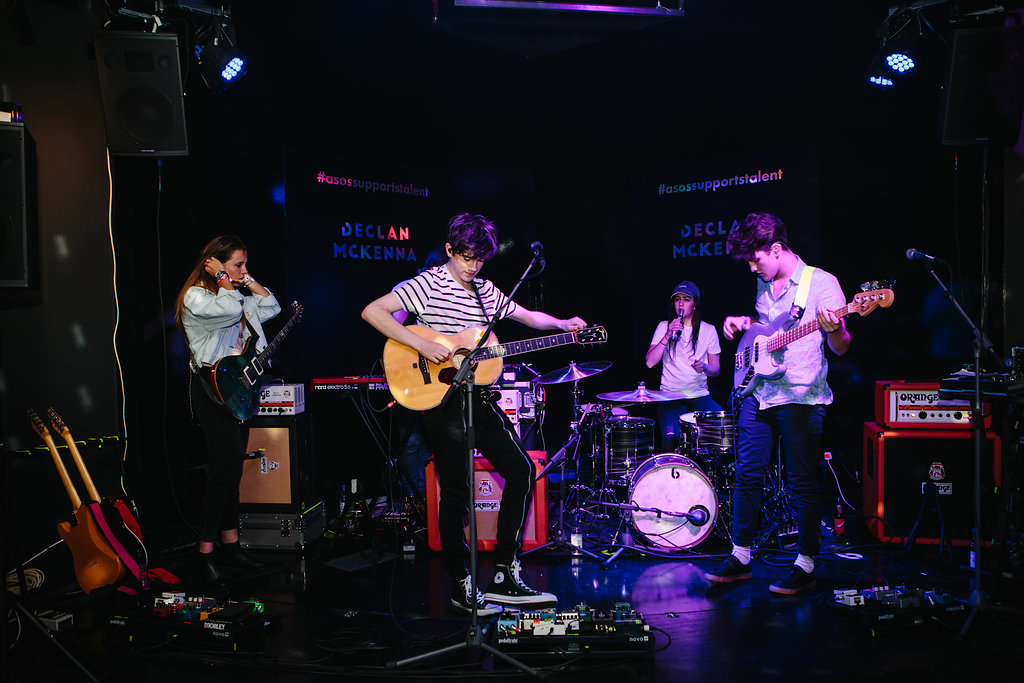 Even though he’s too humble to admit it – in a certain way he is a revolutionary. His battleground is neither on the streets nor in Parliament, his words and sounds form the weapons of his rebellion. Declan McKenna is the young pop singer who’s trying to change the mindset of his listeners by implementing awareness and critical thoughts in their heads. May it be concerning transgender rights (“Paracetamol”) or police brutality (“Isombard”). When he was only 16 years old he won the prestigious Glastonbury Festival Emerging Talent Competition leading him to attract international attention, big festival gigs, a record deal and a chart ranking with his song “Brazil“, which criticized FIFA bringing the world cup to Brazil without making the country’s poverty and politics a subject of discussion. 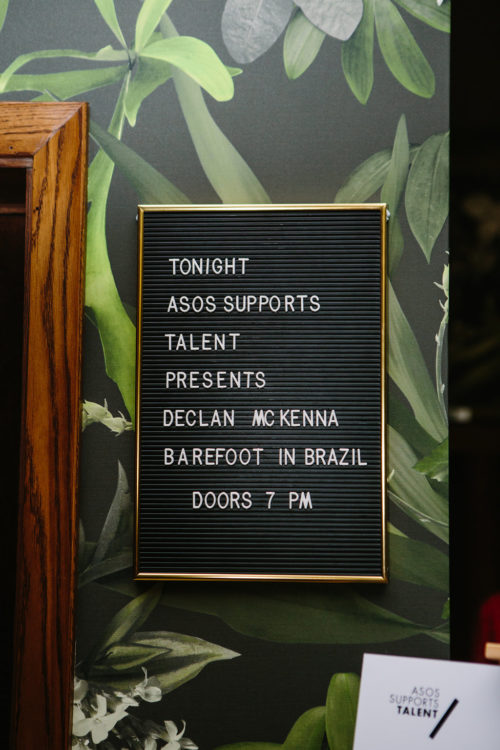 In collaboration with Asos the now 18-year-old Londoner finally went to Brazil to get to know the creative youth aiming to change their living circumstances by music. Declan visited rappers, a female music collective, and he got to dive deep into the everyday reality faced by young people in Rio. The outcome of his trip together with a small team of directors and camera operators is a sensitive, interesting, dark and fun documentary that is worth watching every second. His wish to give back to the individuals he sings about was realized by the help of the unique global initiative “Asos Supports Talent” that gives young creative heads the possibility to fulfil one project they’ve always dreamt about. The other winners were the founders of the gal-dem magazine/collective, dancer Amrita Hepi, musician Bryndon Cook and photographer Yumna Al-Arashi.

We got to talk to Declan, the guitar player and singer with the beautiful, smart voice:

So, let me know what’s going on at the moment Declan?

I dunno, I’m just kinda hungry and very busy today, a lot of photoshoots and interviews so I’m just a little bit sleepy, a little bit hazy, but excited for tonight!

Does it sometimes get too much for you with all the interviews and photoshoots?

It can definitely be intense at times, but it’s a part of the job!

Do you sometimes feel that you have to act a certain way and play a certain role?

I try to be myself, especially when talking to people for interviews. I try to avoid giving off a different impression of myself but it’s very difficult because you’re trying to give a good impression whilst avoiding bending the truth. 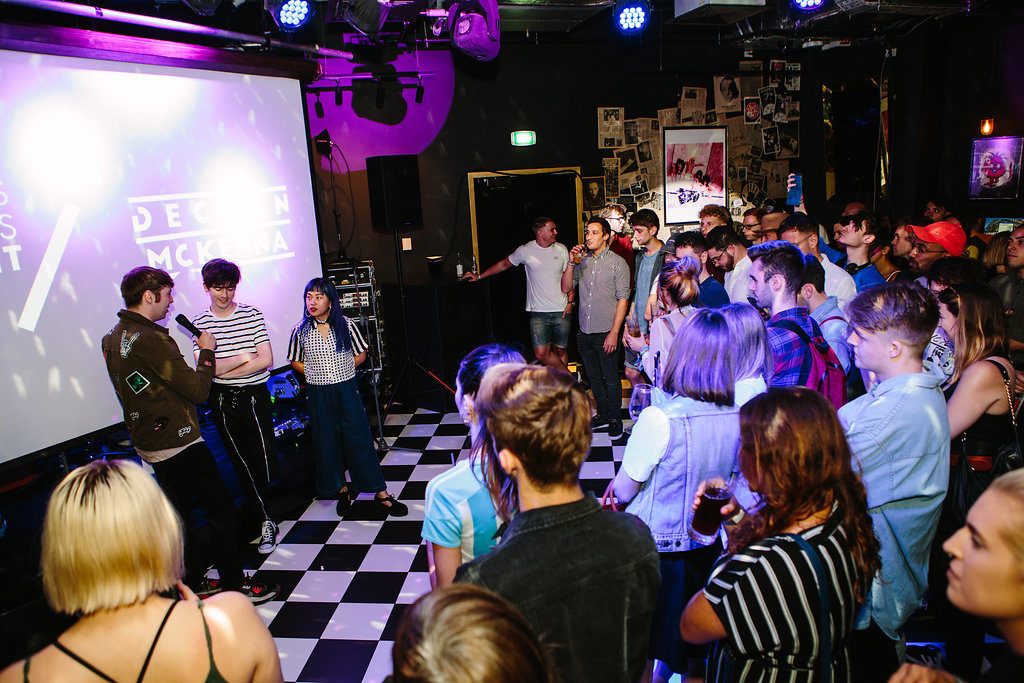 Tell us about your trip to Brazil!

That was a month ago now, it was cool! It was exciting to finally go to Brazil and it was great getting to see what is actually going on for myself, there’s lots that is happening that I didn’t really know about… a very interesting place. I have never been to a city like Rio where it’s so immersed in nature. It’s really really beautiful and there were some really really awesome people that we met out there. I enjoyed it.

What do you think is the biggest difference between the creative youth in Rio in comparison to London? Or, what do they have in common?

In Rio one of the rappers I met was saying that it is quite insular: there’s the North of Rio that has a scene, and the South of Rio has a scene, they have these separate scenes location-wise, especially in rap and hip hop. In London that kind of exists but as a whole the city doesn’t really have its own scenes, they are very much intermingling. Local community music scenes don’t exist in London in the same way as they do in Rio. There’s a different structure to it.

I watched some documentaries capturing the political struggle of youths, did you witness this at all?

I think there has been a huge reaction to the things that are happening, like the new president who doesn’t have much approval from anyone. A lot of dodgy things are happening and police brutality is pretty bad there as well. There was a lot of stuff I didn’t really know anything about until I got to visit and speak to some locals. I’m really glad that I got the opportunity to learn a little bit more. I definitely felt that people were quite openly talking about politics and all the things that are happening there, which is great!

Was there one story or one person that really touched you?

It was Marcello at Duto, which is a label, they have a building where they produce music. He was great, he basically put together this project for the people in the community within Rio. Within the area there was a Favela, so it was not particularly rich but there is a really great music scene that he created himself. He was really cool, and that was inspiring. 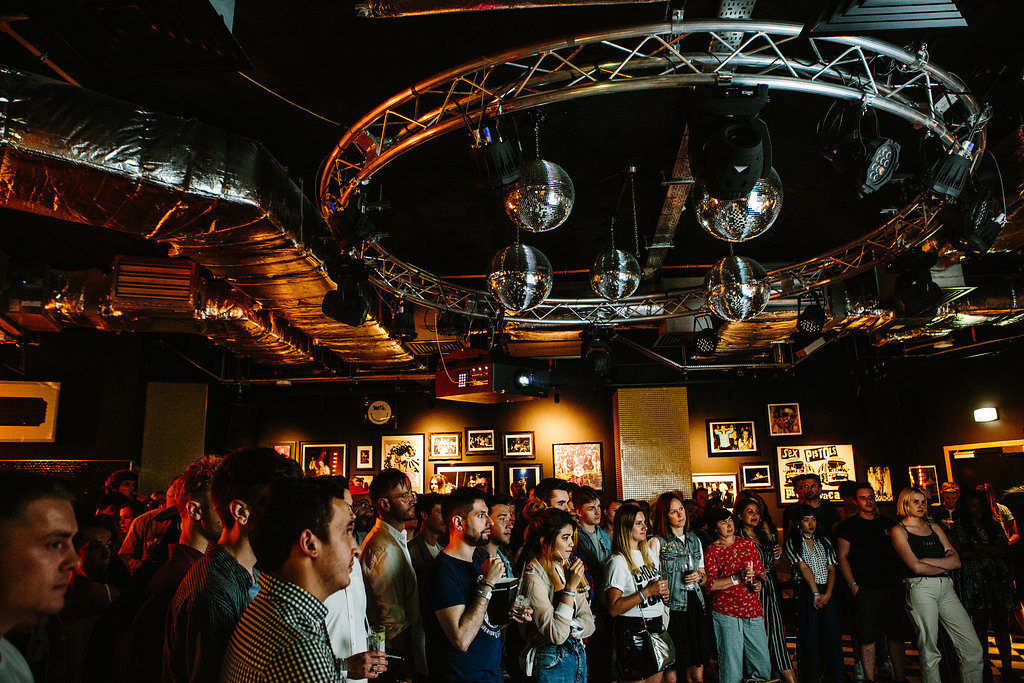 You once said you wouldn’t see yourself as a revolutionary – how do you define that term?

I don’t think there’s anything massively revolutionary about what I’m doing. I think there’s an element where I do talk about politics a lot, I do talk about these things, the rest is kind of like ‘whatever’. When bad things are happening in the world, when you want to change things, I think being involved and talking about politics just happens, it’s what you do. It’s become part of the art that I make and put out into the world, it doesn’t mean I’m quite the revolutionary voice of the generation that people say. I mean it’s flattering but I definitely think it’s more to do with observing the world around you than anything else.

When thinking of being a revolutionary, does anybody in particular spring to mind?

It seems as if the youth have suddenly woken up and found its political voice again over the past couple of years. What do you think has changed? And why do so many still hold back their opinions anyways?

More and more as I grow up young people want to become engaged in politics, I think there has been so much change in the world, such as technological advances. I mean, social media has only recently become really popular in the last 5-10 years and with that came a lot of change. So, I think young people took a while to adapt, especially growing up with that change and not really knowing what’s happening with the world kind of meant that maybe people were a bit lost in what they wanted, and understanding what they wanted from themselves and for the people around them. Now, I think everyone is slowly adapting to it. I mean, I was very young when these changes were happening so I can’t really speak on behalf of them…

There are a number of reasons: people talk and don’t talk about things for a number of reasons, often people feel constricted to social norms, or they are scared about saying something out of place. But I feel like this is becoming less and less of an issue. I think it is definitely fear of the unknown a lot of the time. 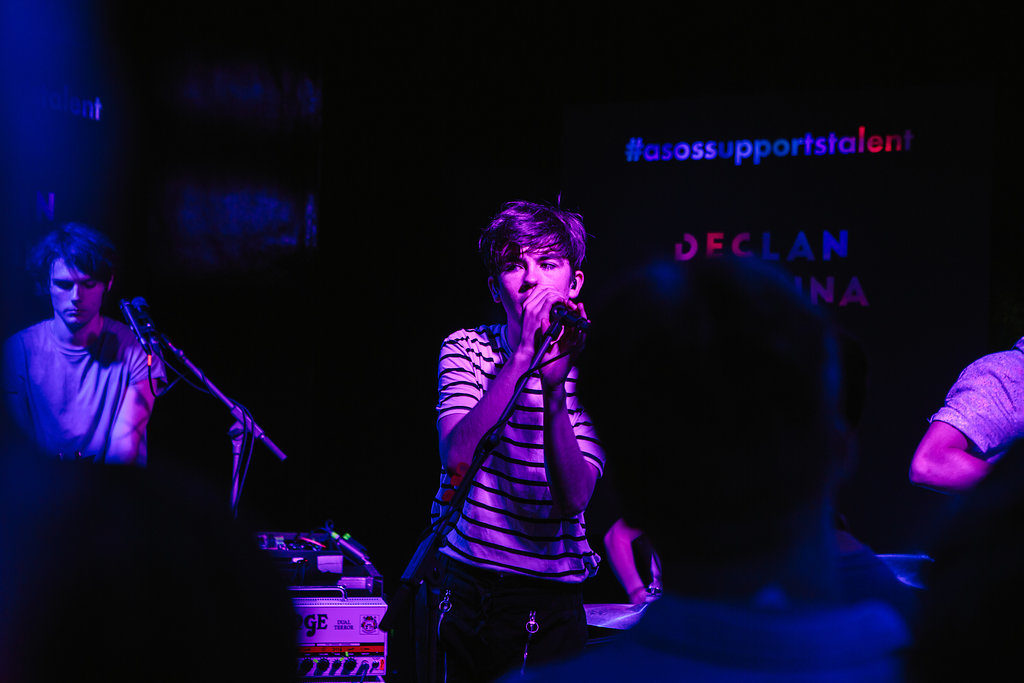 Are you happy with the outcome of the general election?

I don’t know, it’s really hard to tell. The government that is currently in place is really bad. I don’t think anyone is really happy about it. I think a coalition doesn’t make sense, let along whether I have an opinion on it. I mean, it’s a centre right party with a far right party, they are fundamentally different. I’m not exactly happy with it but it could be a spark for change if there is another election called, the party understands just how bad it is, if any positive change comes out of it then it could be a good thing. For now, I don’t think it’s that great.

Do you think it’s going to be a big change for the youth?

It’s quite scary if we have the DUP, their opinions on LGBT rights, abortion rights. They believe in a number of things that are very backward, it is especially worrying considering they were voted into power on what? 200,000 seats in Northern Ireland. It’s not representative of the UK, definitely not representative of young people in the UK.

Is there one word that you would never use in any of your lyrics?

Probably just the obvious ones like racial slurs, anything like that wouldn’t come into it. There’s probably a list of words that I just wouldn’t say generally. One thing slightly more interesting that I guess I would avoid is my least favorite cliché. In pop music people talk about there being fire in your soul and I would never use that, I just generally don’t use the word fire, it’s always used in quite a cheesy way in songs.

What are you currently obsessed with? 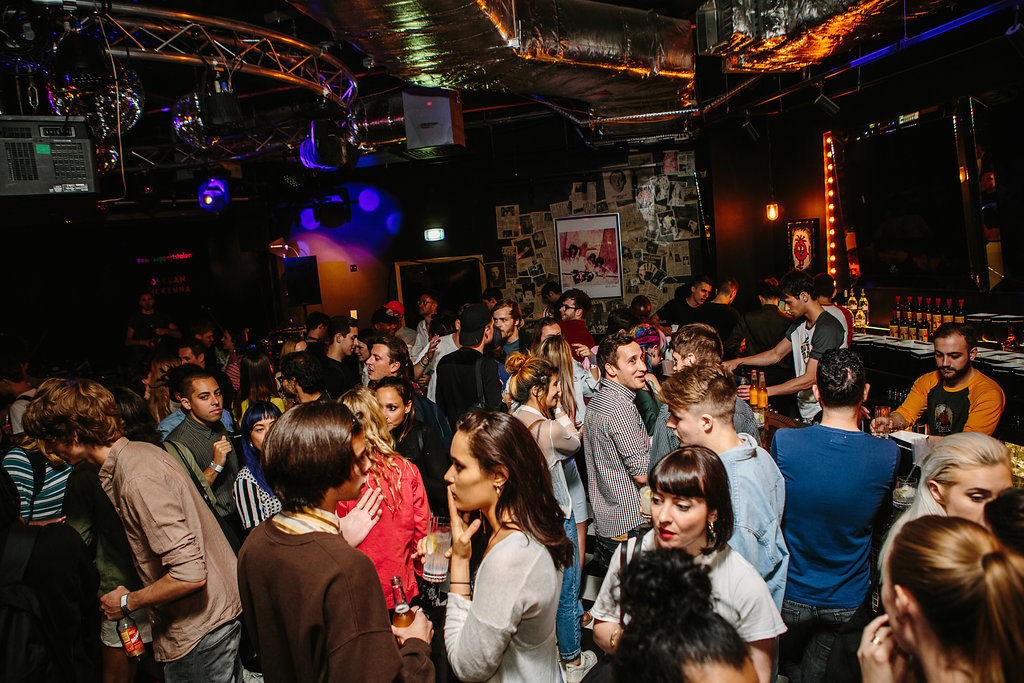