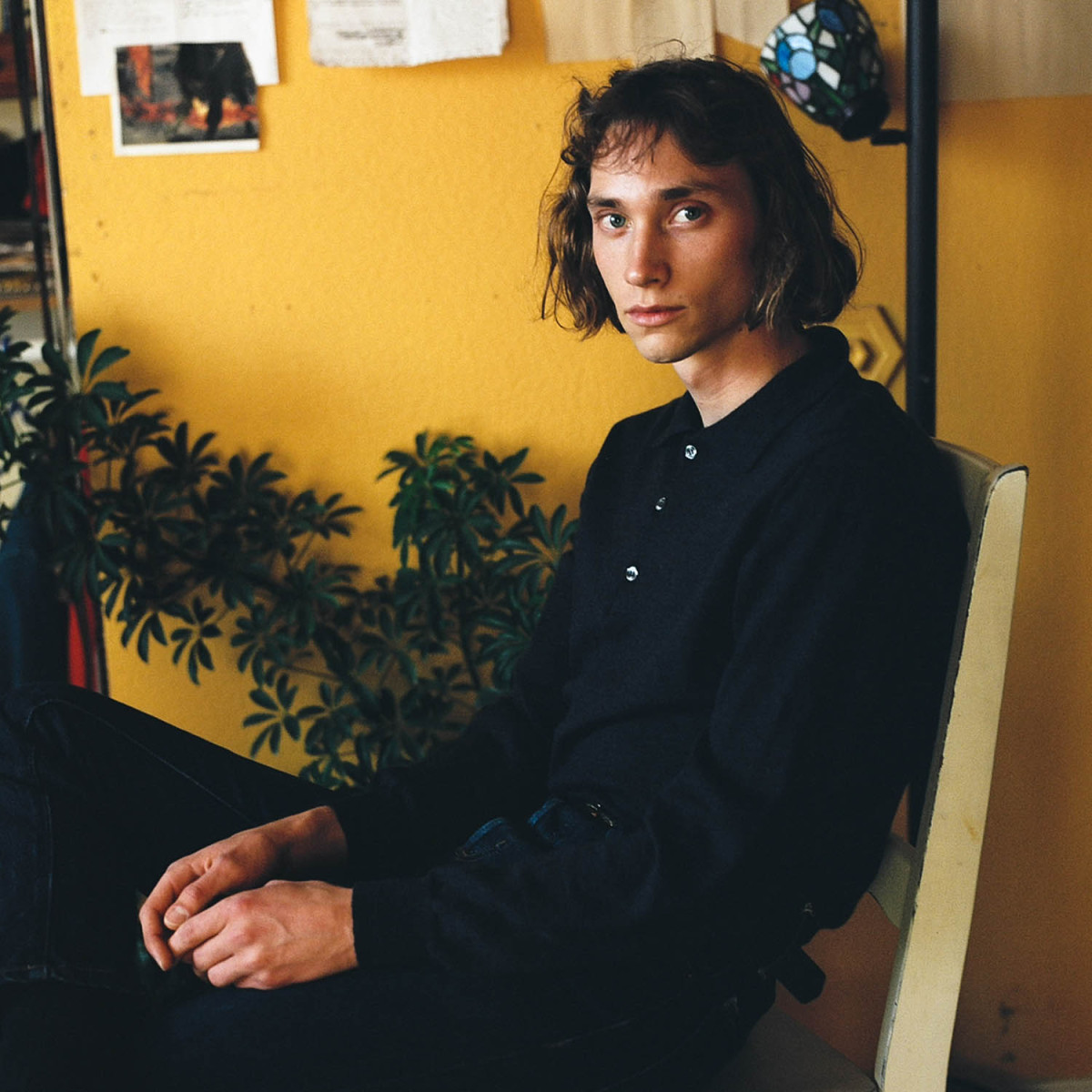 I don’t like it when artists working today make everything look so hard to get, there is no need for viewers to sit there and look at it and wonder “what was this artist thinking?”. Art is not an intellectual exercise and that’s why I like Julian Klincewicz.

In his art there are words, there are images that directly trigger something and you don’t have to swim in the dark wondering what are you looking at. Everything he does is like a puzzle in his body of work, as somehow all the things complement each other – artworks, music, filming, fashion, everything is just well rounded. Julian’s work includes collaborations with Russian photographer/designer Gosha Rubchinskiy, New York/LA based womenswear label Eckhaus Lattta, contemporary painter Kelsey Brookes, as well as Rapper/Producer/Designer Kanye West. To this day Julian achieved more in his young life than most of the people do in their entire lives – from his incredible opus of work to doing Gymnastics and Circus arts, practicing Transcendental Meditation, joining Teen-Arts Council program at the Museum Of Contemporary Art, San Diego at the age of 15. Julian is really on it! There is just a certain depth and life stamina to him – we are fans.

How would you describe your work?

Right now I feel like I’m actually at the beginning of the middle of having to re-define it for myself, or maybe loosely intuit what it’s about.

I think most of my work, whether it be videos or silk flags, deals with humanness. With this feeling that people want to be connected to each other, that there’s a real craving and necessity for empathy. I couldn’t really say why my work has that tone, other than that when I look at people – especially in videos, it’s from a place of really being transported and enamored by them and their human, and wanting to share that with others.

Why do you do what you do?

I have this experience, that when I look at a really beautiful picture like something by Bruce Webber or Collier Schore, or read a poem by Patti Smith, or look at Matisse’s Jazz prints for example – that they can totally transport me to a different world – that for a little bit I get to live in someone else’s imagination and vision and reality, in someone else’s feeling. It’s one of the most beautiful and free experiences, and I think when I make the work I do, it’s me figuring out what my world looks like – and maybe someday someone else will look at something of mine and feel the same way.

Also I think maybe I couldn’t not do it… I’m not sure if it’s a romanticized version of the human/artist experience, or wholly my reality, but I really feel the need to be making the things I make, to be doing the things I do, and I start to feel really lost and sort of crushed when I can’t be making. I try to make work for myself, work that I need in that moment, work that feels true to where I’m at as a person, and I hope that it feels that way to other people.

So right now I’m at the SFO airport – I think facing North. There’s a Japanese boy – probably about age 12 sleeping behind me on the left with a navy shirt, and his mother besides him [slightly to the right] striking a similar pose to that of The Thinker with a happy and sort of “everything is alright” look on her face. About 20 feet behind them – and dead center (ie. 6o’clock if I’m facing 12) is an older Canadian man with one of those fishing hats on and some cloud like whisps of white hair poking out. If we go further to the right now – lets say 3 o’oclock – far outside the window is the number 74 in black text on a yellow box marking Gate 74 – there is no airplane at gate 74. – there is however an Air Canada plane at gate 92, which is almost in my perfial vision, though slightly too much in my background to be registered as more than “bright white light, causing me a slight headache.”

A different type of background would be that I was born in Chicago, spent summers in Michigan, moved to San Diego when I was 7 with my Momma and my Sister. I did Circus arts for seven years, got second place in Mountain Unicycle competition, I started doing Transcendental Meditation when I was 13 years old, I started skating when I was 10. My mom became a teacher so that I could go to a Waldorf School– in Europe they’re called Steiner Schools – so I went to a Waldorf school and graduated high-school in 2014. I think skateboarding has informed pretty much everything I do in one way or another – it was one of the first worlds I really could call my own.

What does your work mean to you? What is it all about? I mean, what are you trying to achieve with what you are doing?

It means the world to me. It means that I might be able to make sense and translate feeling into physical or visual or visceral. I’m not totally sure what I’m trying to achieve, I give myself goals and mile stones to try to hit, because they’re things I like, on a totally personal level they just excite me; But ultimately I just want to keep growing, to be a better person, to hopefully someday inspire other people, I want to work with/alongside the people who inspire me. I want the opposite of complacency.

How has your practice change over time?

It’s become a bit more deliberate I think – especially in the past few months I’ve sort of had to re-evaluate what kind of videos I want to make, what kind of installations I want to do, what one type of song means versus another – maybe that’s all the process of trying to figure out how it’s changing, or needing it to change now.

What do you think makes an artist?

I don’t think I’d feel comfortable speaking for someone else and it’s even sort of in a constant flux, but for me right now, art is like a language, or a feeling – it’s just how you see things and think things and exist in space… it’s that you couldn’t be anything else, you couldn’t not do see the world that way. And I don’t want to sound goddy or anything – because maybe it’s not that for other people, but that’s just really how I feel.

Who do you make art for?

This is something I actually think of a lot. I make art for myself, so that it can be for other people. I make art that’s important for me, that I need to make sense of my world in a more comprehensive way, with the hope that other people will connect with it and relate to it, or at least be interested in it.

Do you care about how people perceive your work?

I do care for sure, but not in the sense that I’m looking for validation. I care because I think everyone’s opinions matter and everybody understands things a bit differently. But I don’t let the way other people perceive my work dictate what kind of stuff I’m trying to say. It’s actually usually more interesting when people don’t like your stuff and you can talk about that, because I feel like I learn a lot more that way.

If your artwork could have a soundtrack that would start paying everytime one would look at your work, what would it be?

Mishima (closing), by Phillip Glass. It’s my favorite song right now, and it feels so cinematic that every time I hear it I just imagine movies and motions and it feels like a best friend.

Do you feel there is a right or wrong way to understand someone’s work?

I mean, generally I don’t think there’s a wrong way to understand art – it’s such a personal experience, but sometimes it depends on how the artist wants their work to be perceived. If someone is making a really specific piece where the context of the materials and the ideas are geographically and socially specific, and then taken completely out of that context (which most art is at some point) people could get the wrong idea about what the artist is trying to say… maybe it’s more like an onion & an invisible onion though – there’s always more layers because your associations and experiences are different, and that’s true of the artist and the viewer.

What’s the last exhibition that you saw?

There’s an exhibition of Asafo flags at the Mingie International museum in San Diego, that I went to see with my mom. They’re really really amazing.

What superpower would you have and why?

After that, maybe being able to disapporate like in Harry Potter.

Do you collect anything?

I do! I collect tiny books and any objects that feel inherently precious to me. I also make sure to get a pair of Gosha socks every season.

What are your favorite hobbies?

I like chess – bobby fischer is wild. I think I need to get some new ones. Maybe playing guitar? Everything is sort of just everything…

Do you believe in love?

Yes. A million times yes. I’d say I fall in love (in some small amount) everyday – with a person, with a movement, with someone’s mind, with a photograph, with a sentence in a book that sums up exactly a feeling I’ve never bee able to sum up, with the way light goes through my window. Yes – love is very very real.

What book do you think everybody should read?

Jitter Bug Perfume by Tom Robbins, Just Kids by Patti Smith, The Brothers Karamazov by Fyodor Dostoyevsky, and No One Belongs Here More Than You by Miranda July. Also The Hands Of Janne Marie by Rimbaud.

What do you know is true that no one else agrees upon?

That truth is an individual activity, that there is no one truth – there are similarities, but everyone’s understanding is different, how they’ve been treated and what they expected and what they make of the world and the knowledge that they and that others do not, and the knowledge that others have that they do not have, is always in flux, and so is “truth.” Maybe this doesn’t apply as firmly to science – but everything else it does for sure.

What was the first experience in your life when you realized you had the power to do something meaningful?

I don’t know if this was the first time, but the first thing that came to mind right now was when I was in third grade, and I was adement that I needed to play the Princess in our class play “Saint George and the Dragon.” I think it sort of broke a social wall at my school and I remember a lot of parents talking about it as brave and revolutionary that I wouldn’t be scared of being made fun of for wanting to be the princess.