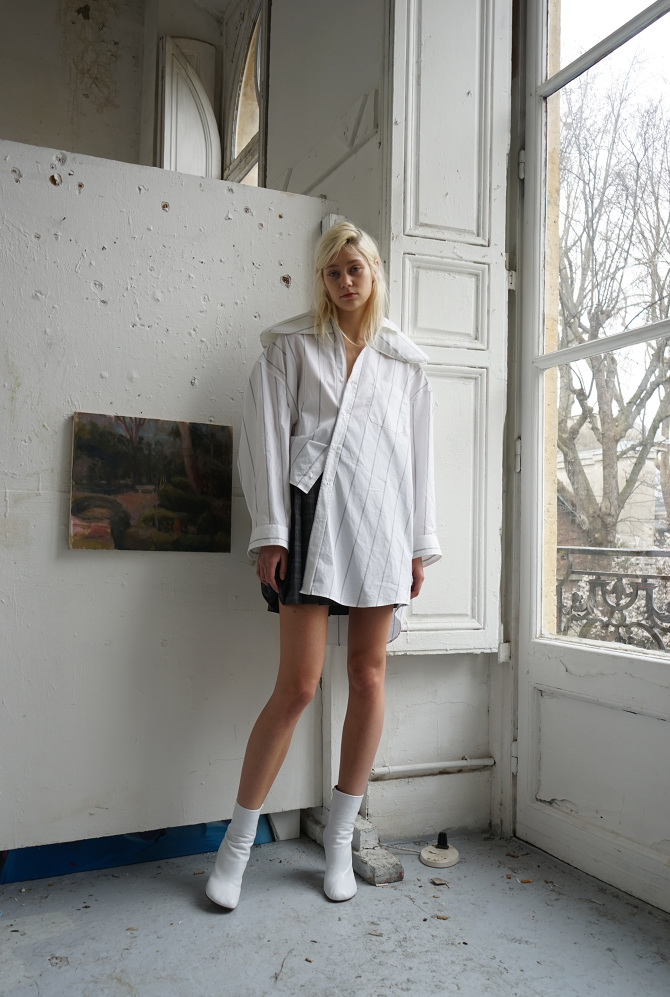 THE RUSSIAN PHOTOGRAPHER CAPTURING THE RAW BEAUTY OF PARISIAN WOMEN

Stas Kalashnikov has one of those stories you think must have been dreamt up by a producer in the hills of Hollywood. After studying engineering for five years in Moscow the Russian born 25-year-old purchased a camera and started shooting his friends. Now based in Paris, Stas has tapped into the fashion industry with a unique aesthetic that captures the natural beauty in his subjects. Minimal backdrops and impeccable lighting give emphasis to a tailored style of photography that works for his growing list of impressive clients, including Pressure Magazine, Interview Russia, Fucking Young and Vetements. Oh and he also runs his own photography magazine Alei Journal.

How did you start shooting in Paris? Did you know some people before you moved here?

No, I knew no one. I came here because one of my friends wanted to go shoot in Paris and he needed an assistant for two weeks. It was a dream for anyone from Russia to come to Paris two years ago. After my friend left I met with a Russian woman who owned a store in Paris. She offered me a paid job shooting for the brand, I agreed but mentioned my flight home was the next day. She said they would buy me a new flight and offered up their apartment to stay in.

In Russia they give you a Visa only for three months. In the third month I thought about leaving but I got another job and another one, so I just decided to stay and I still don’t have a Visa. I’m illegal.

Did you speak any French or English when you came to Paris?

No, I didn’t speak French and I spoke maybe 30 words in English. I didn’t understand anything at all. I didn’t even know how to say ‘can you turn your head left or right’. I didn’t know this until I met my girlfriend who was French. Then I learnt it fast, because I had no solution.

Where in Russia are you from?

I was born in Belarus but I moved South to a few different cities in Russia until I went to study engineering in Moscow. For my friends and I, to go to Moscow was super cool. For the people where I grew up, it is insane to be able to go and live in Moscow because it’s the only city where there is money, jobs and a degree of a good life. And Europe? We never even dreamt of living there.

Why did you move from engineering to photography?

I bought a camera because I had a job and could finally buy everything. There was a really cool girl in my university with curly hair, very natural looking. I told her that I’d bought a camera but hadn’t shot anything and she just said ‘okay well let’s go and try’. It was summer time and she was wearing this beige coloured dress with embellishment. We went to this white Russian church and took some really amazing photos, probably in automatic mode.

When did you start taking photos?

I started four years ago, but during this time I worked very often. When I was in Russia, I shot everyday sometimes even twice a day because I was living in a photo studio. When I started, I approached agencies in Moscow and asked to shoot their models for free. They sent me a new girl every week and in a year I think I shot maybe 300 times.

Why do you prefer to shoot women?

For me women are the most insane thing. I am really shocked that they even exist. No seriously! It’s inspiring me so much how different women are. But in Paris I’ve started to meet a lot of boys who I would love to shoot. It’s not often that I do this because I really don’t have time so I always shoot women first.

Have you been home since coming to Paris?

No, my Mum came in October and I hadn’t seen her in two years so I was really happy. But other people in my family, I haven’t seen them.

Are you going to stay in Paris?

For this year, I’m going to stay here for sure because of Alei Journal. There is a lot of stuff happening and we’re going to have the third issue out in September. I think after the third issue I’m going to leave. I’m going to go to Berlin because a lot of people tell me about this city and it’s really different. I’m really tired of being in France without going anywhere for two years. I really love this place but I need a change. I’m going to come back to Paris because I have a lot of friends here; it’s like my new family.

See Stas Kalashnikov’s new exhibition on the 28th February 18:00 at a secret location in Paris. For more details follow him here.