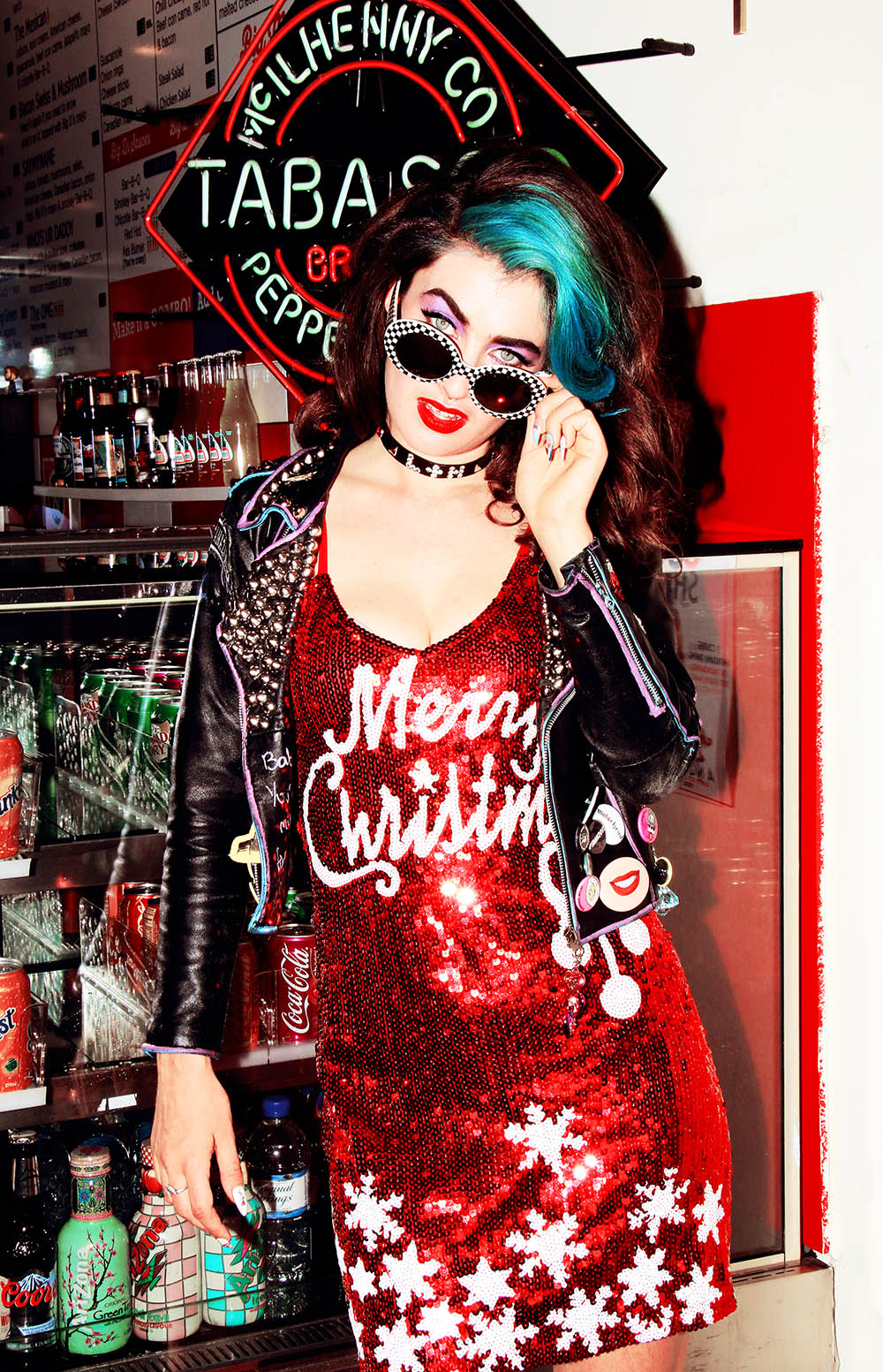 Fox Pflueger, insta celeb to be and Australian performance artist. This Melbourne native latest is part of Folk Collective, a creative agency that is a frontrunner in this ever changing industry. Model, performer, producer, health witch, internet priestess, perhaps tv star of the future our girl wears many hats. She is one of the most ambitious gals we’ve ever encountered and it was high time we had a chat and found out exactly what makes her tick. INDIE world, meet the unstoppable Fox Pflueger! 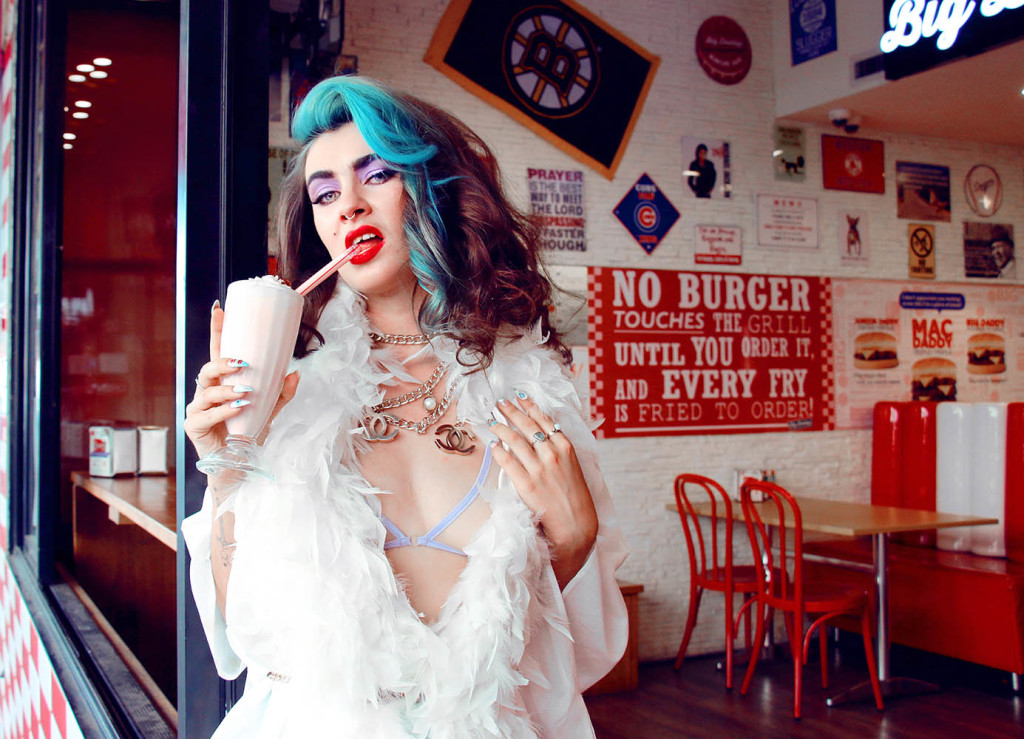 You are a part of Folk Collective, can you tell us a bit about the agency and how you got involved with it?
Folk Collective is a modelling agency run by a bunch of total power babes in Melbourne that pride themselves in celebrating diversity, authenticity and personality. I got involved because I knew the owners of the company who were keen to have my look on their books, as well as being positive about being able to get me gigs based on my performance skills.

Of late “alternative” models have grown to be far more popular in mainstream media, do you feel this development has helped you in your career?
I have been modelling since I was a teenager, and used to spend a lot of time on up keeping a generic feminine look to then still not get much work in a sea of other models who looked just like me. But now my personal aesthetic choices have broadened to not conform to generic standards, for example having a monobrow and sporting a chipped front tooth. Where these aesthetics may have been totally rejected by other modelling agencies Folk Collective welcome and celebrate my choices, even telling me that they would never make me remove my body hair for a job and would instead insist on its inclusion if that were necessary. 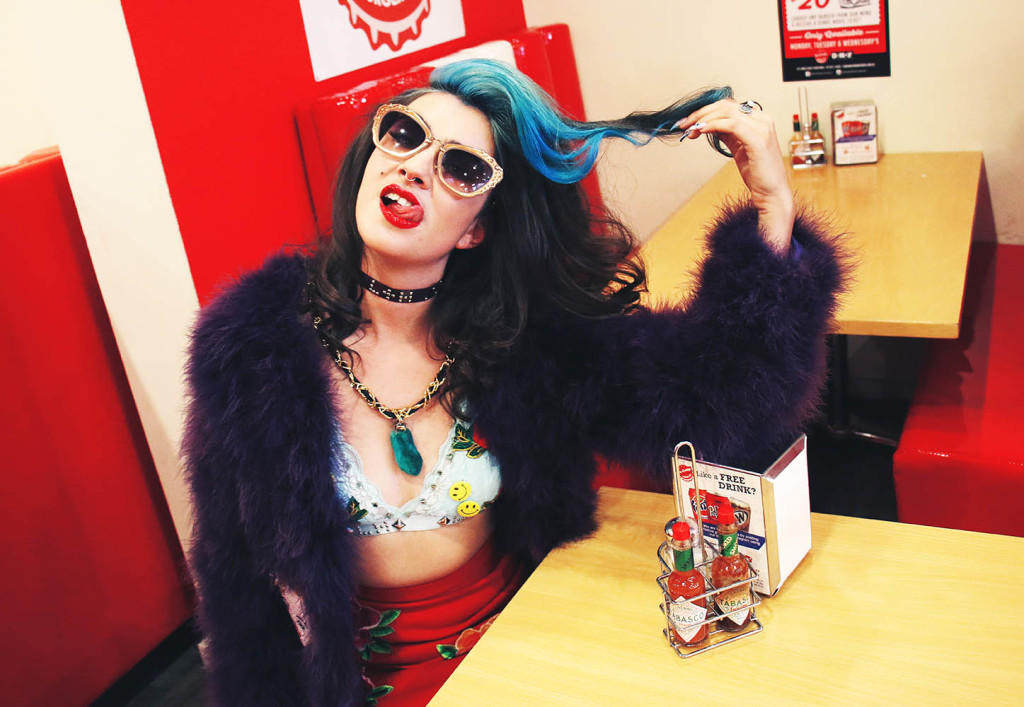 What in particular do you think sparked the mainstream media’s interest in this development?
Advertising agencies are finally realizing that people are all very different, and that using the same kind of aesthetic of models over and over again is getting harder for people to relate to. There have also been a lot of major blowouts of the ridiculousness of beauty standards recently, and a much broader understanding of what it is to be beautiful has been emerging. Finally people are realizing that beauty is not in the eye of the beholder, but in someone’s ability to feel beautiful no matter what they may look like. I attune this to the celebration of the selfie. Because why can’t a monobrow, a fat ass, or freckles be beautiful? Everyone has a different opinion, and a different perspective and I think the trend in using alt models reflects that. 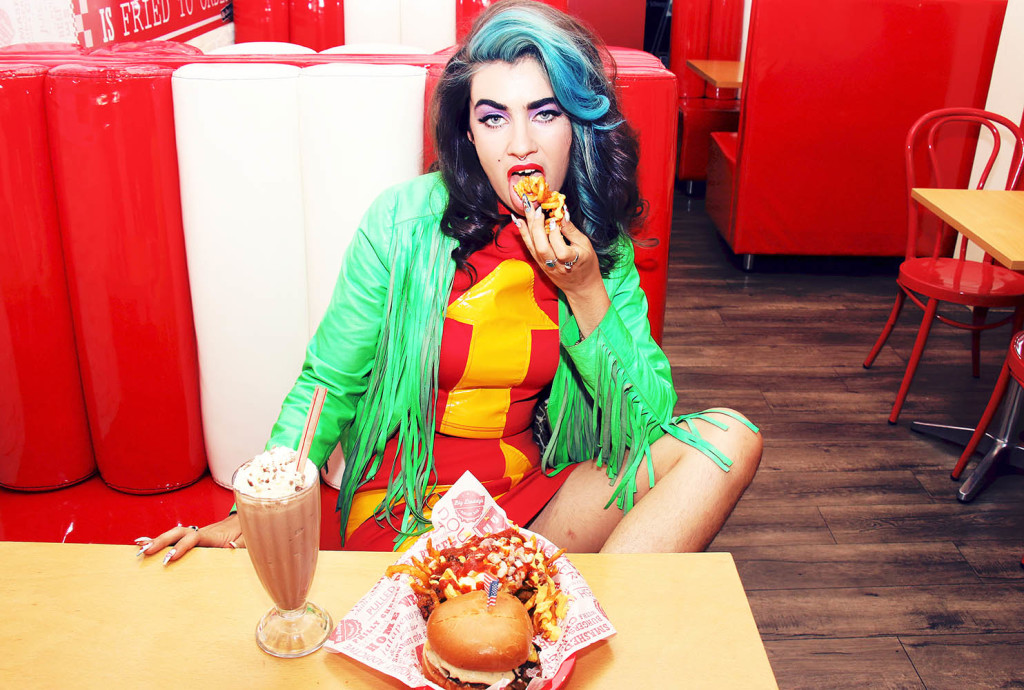 How did you get into performance art?
I did theatre and acting obsessively as a teenager but it wasn’t until I was about 18 that I got involved with a renegade performance troupe called ‘The Lovelorn Living Party’ who really inspired me to level up my performance style. They put on the most mind blowing shows that were totally kooky. They were sometimes these massive staged musicals with a cast of 120 in circus tents, to intimate cabaret nights where anyone could get up and literally do anything. They inspired me a lot, and I got deeply involved in the production side of the company. I then moved to Melbourne and worked on helping produce with other groups without performing on my own much. It literally wasn’t until 18 months ago that I decided to start performing solo acts and it has been like a powerful creative avalanche of good times. My mum believes that no matter where I go I’ll still end up on the stage.

What kind of performances do you do?
I do what I like to call psychedelic strip-teases, where I use sexuality, vulnerability and humor to create public rituals that liberate my personal insecurities, and more recently trying to expose and erase public brainwashing caused by religion and the patrichary. I like to incorporate singing, recorded dialogue, costumes, burlesque and twerking. My performances are always sassy and cheeky with a deeper context.

You preform in elaborate and extravagant costumes, how big of a role do these transformations play in your performances?
I have always loved playing dress ups, I love the way that clothing can totally change how people perceive you. In my performances my costumes start to tell the story before I even move my body or open my mouth, they represent grand archetypes that the audience can place their own associations with. Costumes are one of the first things that appear in my mind when I start thinking up a performance, and when I have my mind set on something I go to sometimes extreme measures to replicate my vision totally. I am lucky to live in a city with so many amazing independent costume designers that I am able to commission any idea I may have. 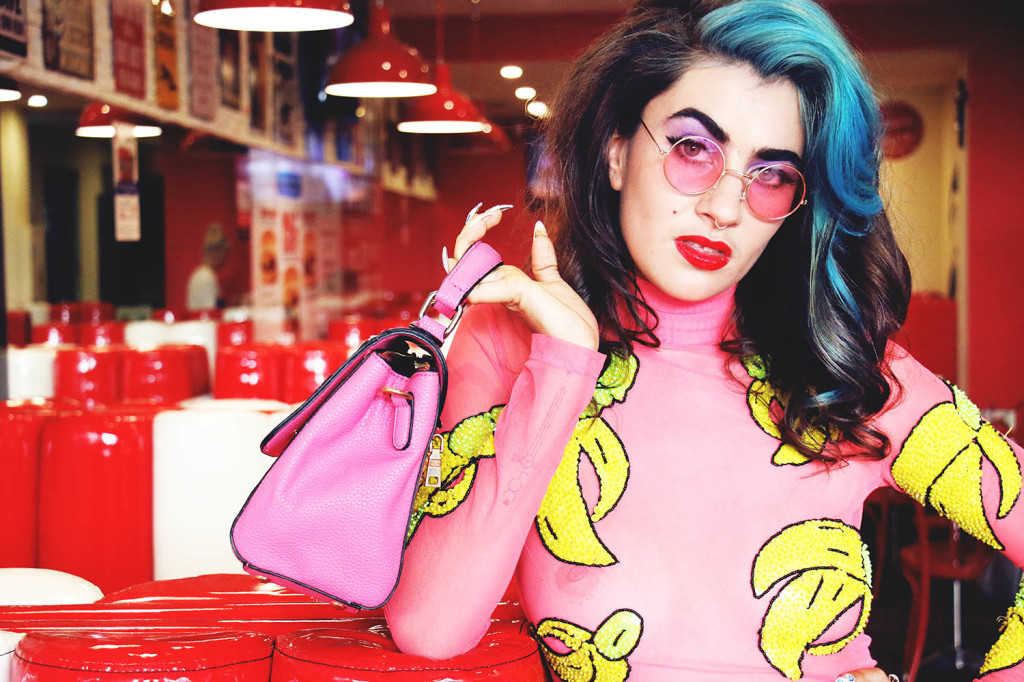 Biggest reward you get from performing?
When people tell me that they have been provoked into thought after seeing my shows. I explore lots of ideas in my pieces about identity, feminism, spirituality, gender and beauty with a sexy wink. Some people only see me getting my tits out, but other people find a deeper connection and open themselves up to question some of their ideas about how the world works, and that is very rewarding.

It takes guts to put yourself out there like you do, is this something that grew over time or was always there?
I have always been confident. Growing up I had the adoring support of my mother; she always encouraged me, no matter how much of a kook I am. Then when watching other performers I found I was always most in awe of performers who did the wildest, freakiest shit. Shows that make you question your understanding of the whole universe by being surreal, satirical or even just down right perverse (See Betty Grumble, Moira Finucane & Glitta Supernova to name some of my personal heros). So when I started performing it just came naturally to be gutsy and unashamed on stage. The concepts of my art appear in my mind like visions that I feel obliged to fulfil, occasionally I laugh at how ridiculous the performances that I dream up are. A lot of it is laughing at myself actually. If I took myself too seriously I wouldn’t be able to make the kind of art I do, it’s about trying new things and not giving a fuck about whether or not anyone has any opinions about you, good or bad. 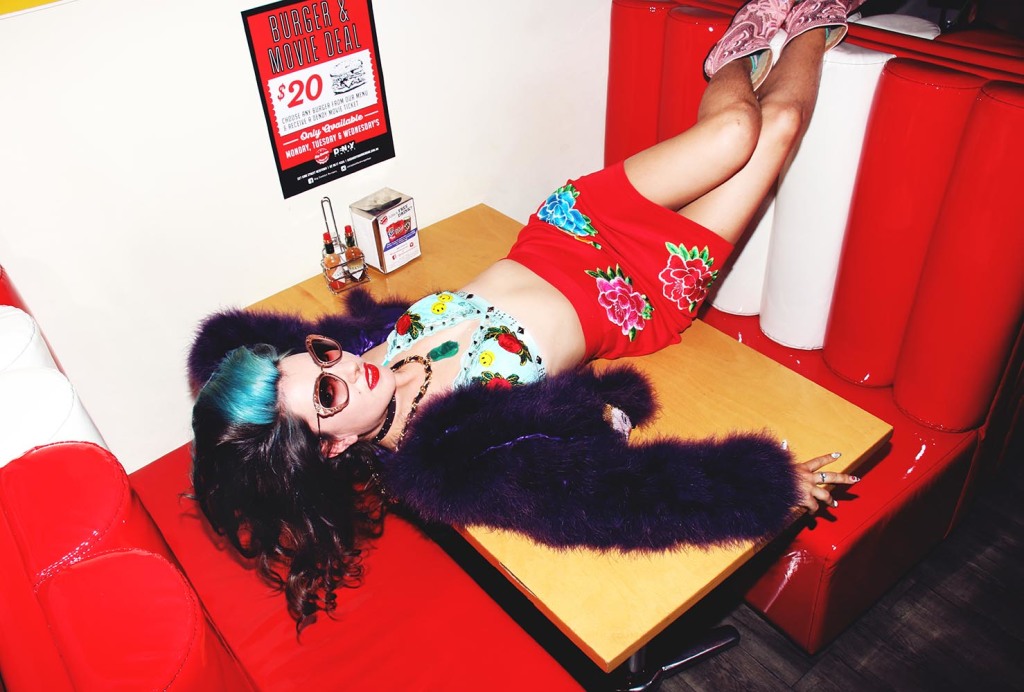 When you try and get people out of their comfort zone during a performance, what is the most challenging element that you have to overcome?
I like to think of my performances as more of a “choose your own comfort zone adventure”. I just do me, and then everyone else can choose how they interact or feel. Some people are really confronted by the art I make. One guy asked me very condescendingly if I was “comfortable looking like that” referring to my gimp mask, pasties and fluro pink merkin when I was hosting at a club, to which I replied “Are you uncomfortable looking at me?”. Truth is that he probably was, but felt like he had to project that onto me to try and slut shame me. I really try and get across this idea in my shows that all self expression is good, and valid and that no one has the right to judge you. Don’t cha know that it is cool to be comfortable in your own body?

Specific place or crowd you would love to perform at or for?
I am desperate to perform at “EveryBODY” (previously “Big Dicks House of Big Boobs”), and am planning on applying for one of the MoNA festivals in Tasmania next year. Would also love to go party in NYC at 11:11, the hosts out there are on the daily slay, v inspiring.

On your Instagram page you state that you are a “Health Witch” and “Internet Priestess” what does this mean and how does one become this?
I am finishing up a double diploma in nutrition and naturopathy at the moment. I am really passionate about health science, the body and how it all works. The planet provides everything that we need to be in perfect homeostasis. A lot of it is intuition too, listening to what your body needs. It is the original witchcraft, but the “W” word got a bad reputation way back when they burned any women who said boo, or rubbed a plant on a wound, or tried to hex their abusive husbands. But witches are cool, intuition is cool, understanding how to be happy and well all the time is cool too.
And I call myself an Internet Priestess because it is the evolution of the divine femme. Everyone can access the priestess within. It is possible to become a channel for the universe and shine bright like the evening star. A part of allowing the priestess into being is to actualise self love and choose independent self expression, and I feel that in 2K16 the Internet is a place to share my priestess and allow other women to realize that they can become the divine too if they follow their desires and dreams.

Greatest achievement so far?
Producing radical performance art uber expression club night MAX FREAK with Celeste Electric and Timothy Fennel with a collective of other babes. We are putting another one on 22nd of October if you are in Melbourne come throw it down.

People you couldn’t have done it with out?
My mum, Celeste Electric, Zackari Watt, Tenfingerz and the whole Melbourne community of queer underground artists and producers that have given me so many opportunities and supported me every step of the way. 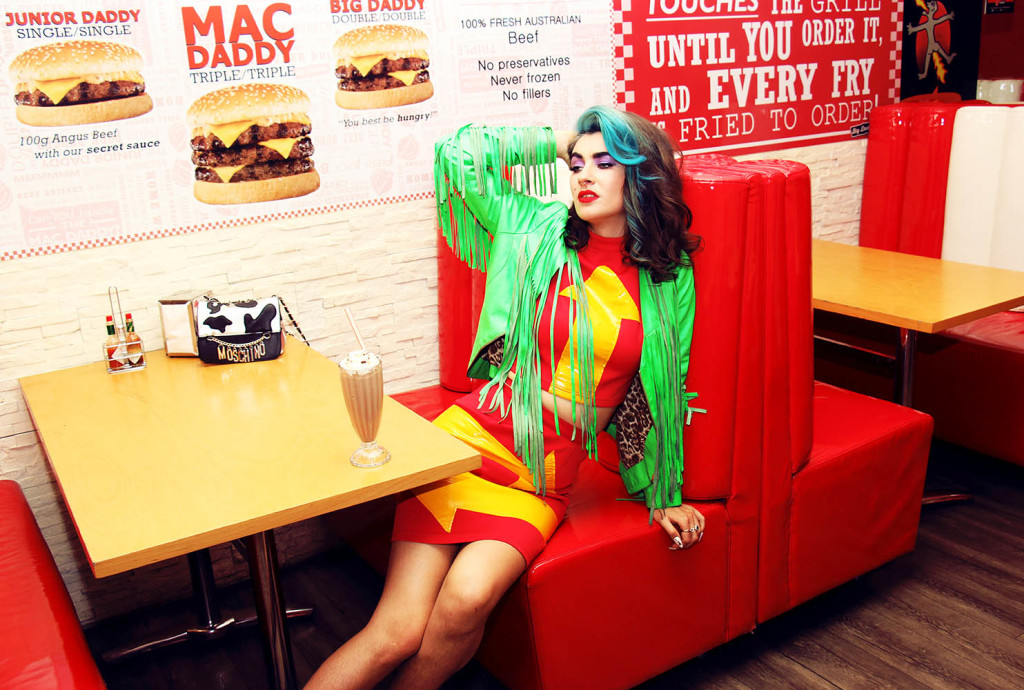 Future goal?
Five year goal is international super star! Cause why not? I wanna come play, perform and party all over the world! I am planning on going to Germany and America next year in the spring time. Hit me up if you would like to collaborate! Fifteen year goal is health science celebrity, with books, and seminars and guest appearances on TV shows helping people be their most optimal selves. Hell, I’ll even have my own TV show one day! Don’t dream it, be it!