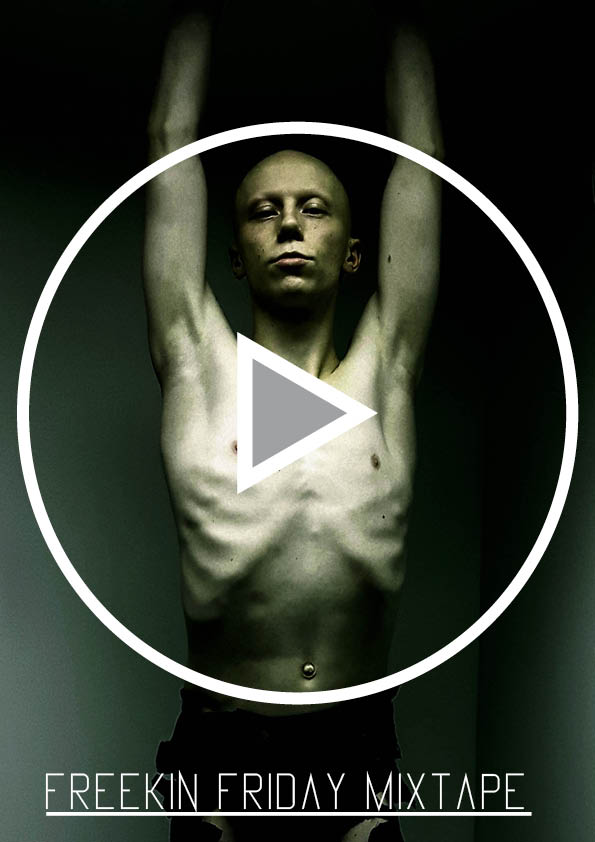 FASHION
by Indiana Roma Voss
2016/07/152018/08/16
Fecal Matter, a Paris based collective that doesn’t restrict itself to just one discipline. Music, fashion, film, photography, you name it they do it. The two founding members have come a long way since starting the collective, inspired by The Matrix by the Wachowski Brothers, it now knows a long list of collaborators with no end in sight. We got a look at their latest capsule collection and got to know the two geniuses behind Fecal Matter a little more. Oh and that’s not all, switching it up on this Freekin’ Friday, Fecal Matter created their own mixtape especially for you! 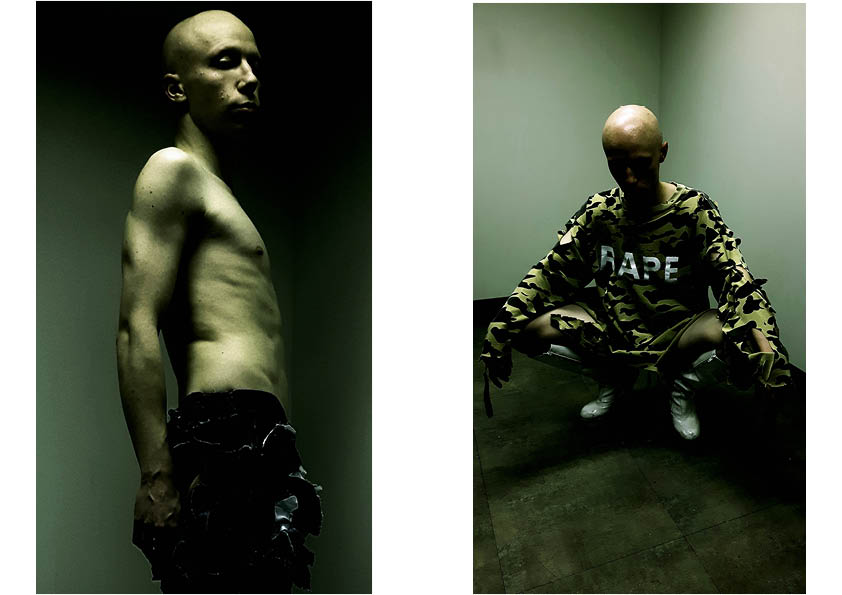 Can you introduce yourselves and tell us a bit about Fecal Matter?
We are a collective of two official members and many collaborators. We’ve constructed a world called Fecal Matter that acts as a multi-functional experience based brand. We create capsule collections whenever we want, sometimes it’s twice a month. Many have deliberate thematics, some do not. We use recycled and non-recycled materials to construct the garments. Usually, each clothing collection is based around a thematic where we create music, film, photography and live shows around it to expand it’s existence. The collection above is an example, it’s called Abondonner, which is French for “to abandon”. It is about the destruction of the white ideal beauty of the ultimate masculine and feminine figures of our time, Adam and Eve.

How was Fecal Matter born?
Our desire to express our interpretation of the world we live in led us to create. We wanted to have the least amount of restrictions as possible, in order to address the topics that requires to most amount of critical thinking and an free-thinking. That is why we titled ourselves Fecal Matter and why we are bald and without eyebrows. Right down to the first step of analysis, to pay attention to us requires an open mind, which is mandatory to try and understand what we do and why we do it. The name is really just an effective form of filtering out the ones who care for what we do and the ones who do not.

You have quite a unique aesthetic, where does this come from and how has this developed over the years?
We draw inspiration from everything around us and everything within us. We love to travel, so naturally, we are exposed to many different environments, which alters our vision of beauty. Also, the internet and technology plays a big part in our creative process. Our aesthetic comes from our love of fantasy, a crucial part of human survival. The Matrix by The Wachowski Brothers played a big influence in our development during our earlier stages. 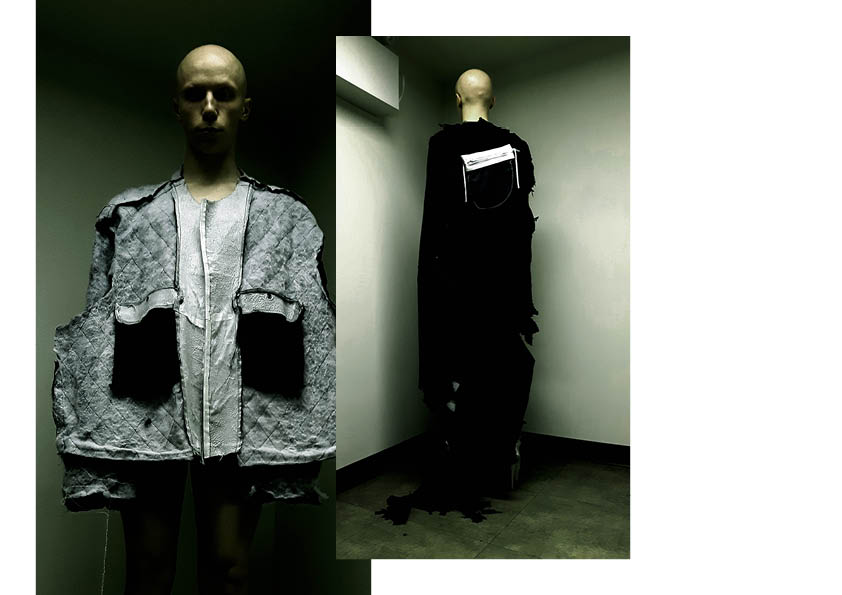 Some of the imagery on your website could be found to be shocking, is this something you try to achieve or is there a different motivation?
You mean the video of the woman giving birth? We like things to be uncensored and we’re just very extreme as you can tell. Currently, the whole collection on our website is about hell. Giving birth looks and probably feels like hell, yet it is the key point to our survival as a human race. Honestly, for us, what we do is not shocking at all. Our motivation is always to be as honest and truthful about how we feel and what we think. I guess in a world where everything is sugar coated to seem desirable or appealing, honesty has probably become the most shocking thing to present.

Where does this obsession with feces come from?
We don’t really have an obsession with actual feces, it’s more with the meaning behind why we all produce it. 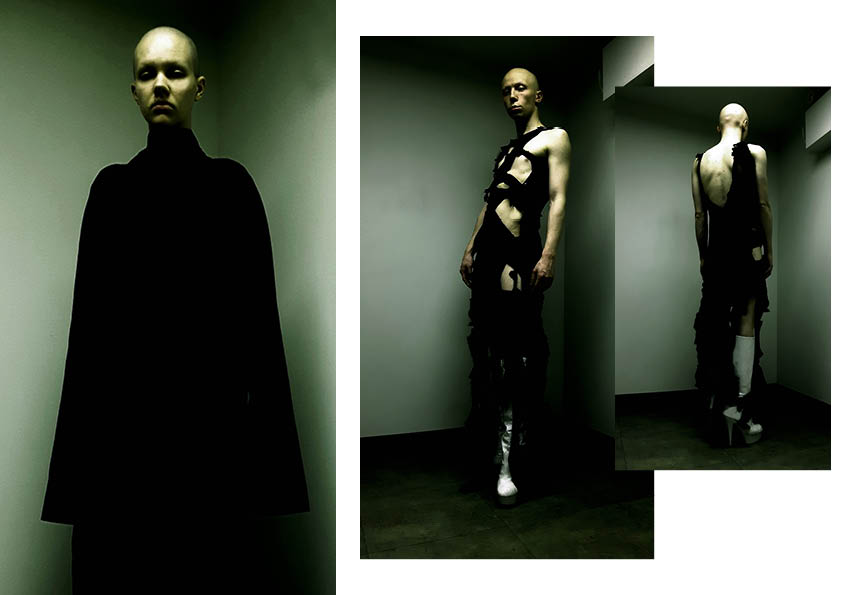 Fecal Matter is more than just a clothing brand, you also mix your own tapes, can you tell us a bit about the combination of music and fashion?
We have so many ideas, it was just a matter of how to connect them all together. We love to create, so mixing different mediums and occupations together was really normal and fluid for us. In result, our team is responsible for the 360 degree of our productions. We don’t believe in the saying “jack of all trades, master at none”, it’s possible to be master at all, it just requires practice and concentration. Although, we find it difficult for most to grasp upon the concept that one day, it will be normal to buy a concert ticket, a movie ticket, a salad, phone, a bus pass, a skin product, a perfume and a coat from the same brand. 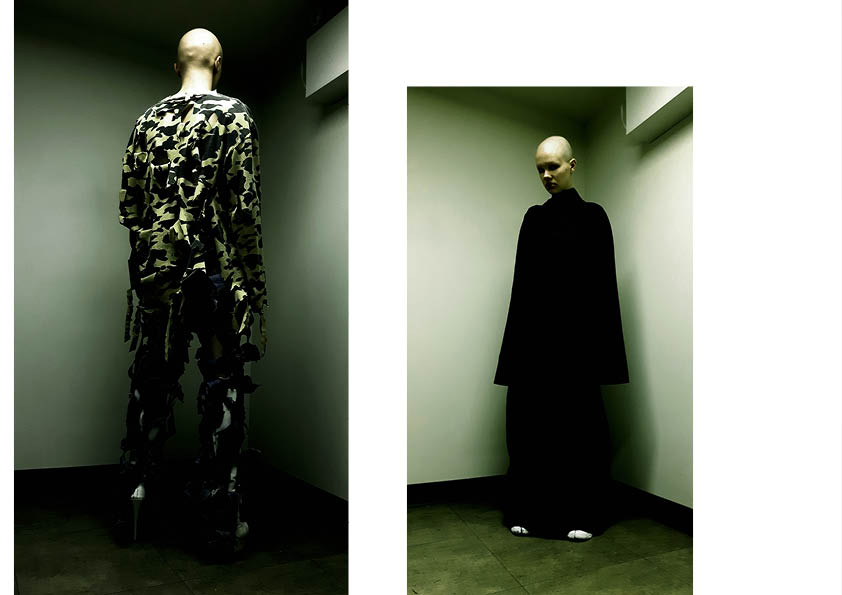 You state Fecal Matter to be based in Paris, Montreal and New York. How did these three cities come about?
We don’t have an official home base and we don’t really want to ever have one because we don’t fully identify ourselves with anywhere in the world. We like the idea that our products are made in different places and we don’t represent a specific capital or country, wouldn’t feel too progressive or honest to do so. Since this past year, we’ve created 11 collections in 11 cities, some were publicly advertised and some were not. Paris, New York and Montreal are a part of those 11 cities. Those are also the three places we visit and live in the most at the moment and since we are always creating, naturally those are the places that shapes the work the most. 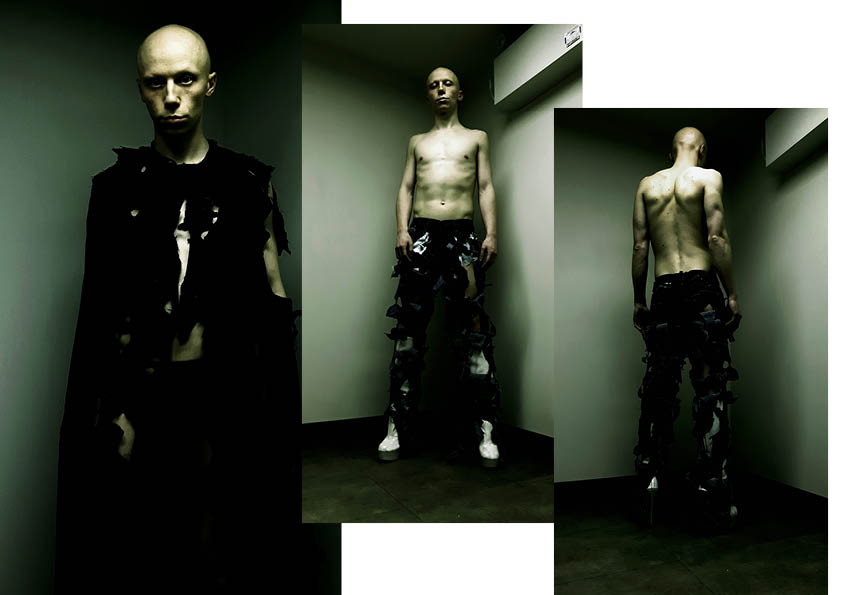 Greatest Fecal Matter moment so far?
Our greatest moment so far was creating and presenting a collection in Auschwitz concentration camp, in Poland. We were there for 2 weeks, we made a collection of 9 looks, influenced by the Donald Trump epidemic and went to the camps in those looks and did a small show. It was a dream project for a long time that was executed with satisfaction. We have not decided when to release the photos and the garments are not for sale, yet.

What can we expect from Fecal Matter in the future?
You can’t really expect anything from us in the future, we are not that easily predictable. To be honest, it’s also a surprise for us.